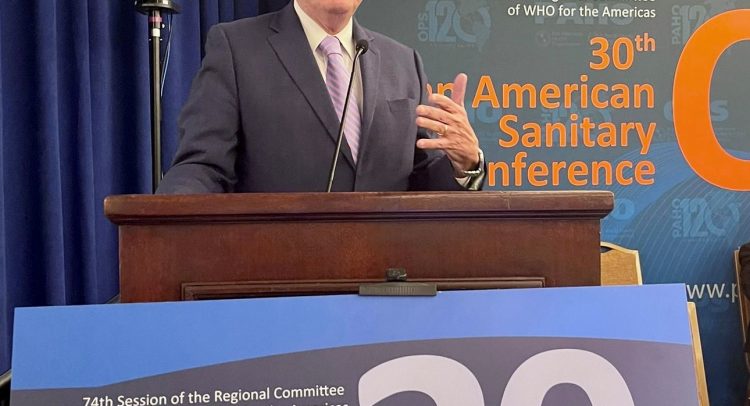 He will begin his five-year term on 1 February 2023

Washington, DC, 28 September, 2022 (PAHO/WHO) – Dr. Barbosa da Silva Jr., a national of Brazil, will be the new Director of the Pan American Health Organization (PAHO). He was elected today by PAHO Member States during the 30th Pan American Sanitary Conference.

A national of Brazil, Dr. Barbosa da Silva Jr. is currently the Assistant Director at PAHO where he has led the Organization’s efforts to increase equitable access to COVID-19 vaccines and to enhance regional capacities to produce medicines and other health technologies.

Dr. Jarbas Barbosa da Silva Jr. received his medical degree from the Federal University of Pernambuco, Brazil, and specialized in public health and epidemiology at the National School of Public Health, Oswaldo Cruz Foundation (FIOCRUZ) in Rio de Janeiro. He holds a master’s degree in medical sciences and a PhD in public health from the University of Campinas in São Paulo. Earlier in his career, he was Municipal Secretary of Health of Olinda, State Secretary of Health in Pernambuco, and Director of the National Center for Epidemiology (CENEPI) in Brasília.

Dr. Barbosa joined PAHO in 2007 as Area Manager for Health Surveillance and Disease Management, responsible for coordinating regional activities related to the surveillance, prevention, and control of communicable and non-communicable diseases; veterinary public health; and health analysis and statistics. In 2011, he rejoined Brazil’s Ministry of Health as Secretary of Health Surveillance and later became Secretary of Science, Technology and Strategic Supplies. Prior to becoming Assistant Director at PAHO, Dr. Barbosa was Director-President of the Brazilian Health Regulatory Agency (ANVISA) from 2015-2018.

This year PAHO celebrates its 120th anniversary, working for over a century to improve the health and quality of life of the peoples of the Americas.