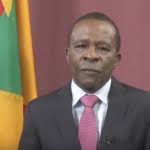 Dr Keith Mitchell, political leader of the New National Party (NNP), says that 2 scientific surveys recently conducted about the work of his party and the influence on the voting population, have shown that there is a strong mix of youth, middle age and senior voters.

“We are not losing any age group,” Dr Mitchell told reporters in a news conference on Tuesday, 7 days before the 13 March General Election. Without disclosing who conducted the surveys he said that his party is not taking the voting population for granted because it is only with the support of the majority they will be able to return to office, he said. “I don’t take the voters for granted, but we are confident.”

Dr Mitchell said that watching the crowds at the various political meetings; he has seen a good mix of all age groups. “Watching the crowds that are coming out to meetings, we see a mixture of all groups at our meetings, and I think that is highly significant,” he said. He expressed the view that his party seems to have succeeded in getting the support of all classes of people from the poor and vulnerable, the middle class and the upper class.

He said that when compared to the 2008 campaign, he has not seen the same level of hostility from some of the civil society groupings. “I can tell you there is no hostility from the religious community like was done in 2008,” he said while claiming that his party’s ability to raise campaign funds locally for the general election has been the easiest.

Dr Mitchell said that he is very much aware that some have not gotten what they wanted since the NNP won the February 2013 General Election, but he is confident that since that period his government has established a strong foundation for hope among the population.

For the 2013 campaign, the NNP manifesto said that it would develop a new economy. Commenting on his party’s ability to fulfil that promise during the last 5 years, Dr Mitchell said, “We have succeeded but more needs to be done.”

“This new economy involves the use of technology, from the jobs to the way we go about our lives and we have done a lot in the area of technology and the education of our people; but there are some things that we have to take more seriously,” he said.

A little more than 78,000 voters are scheduled to participate in the 13 March General Election which is being contested by 45 candidates representing 7 political parties. The 2 main ones are the ruling New National Party and the main opposition National Democratic Congress.

Members of the Royal Grenada Police Force are scheduled to vote on Friday, 9 March 2018.

Sandy Point to get more land for housing