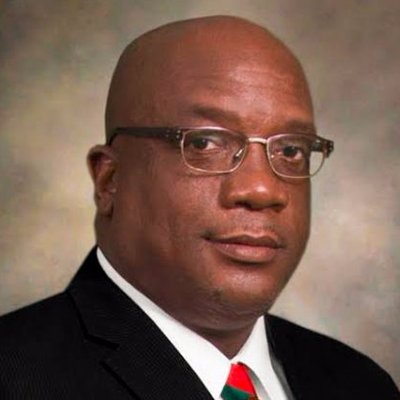 Harris was born and grew up in the rural village of Tabernacle, Saint Kitts, in 1964. He attended the Cayon High School and Basseterre High School before going to six university campuses, two in the Caribbean and four in Canada.

In 1988, Harris graduated from the Cave Hill Campus of the University of the West Indies with a B.Sc. degree with a First Class Honours in Accounting. He returned home and worked for two years at managerial level with S. L. Horsfords and Co Ltd.

In 1990-92 he pursued his M.Sc. degree in Accounting at the St. Augustine Campus of UWI in Trinidad and Tobago.

Harris participated in elective politics in 1993 and was elected as a Member of Parliament on the St. Kitts-Nevis Labour Party ticket in parliamentary elections held in 1995, 2000, 2004, and 2010.

In the buildup to the 2015 general elections, the PLP joined the Team Unity alliance with the People’s Action Movement and the Concerned Citizens’ Movement. The alliance won the elections, and although the PLP won only one seat, Harris became the third Prime Minister of independent St. Kitts and Nevis on 16th February.