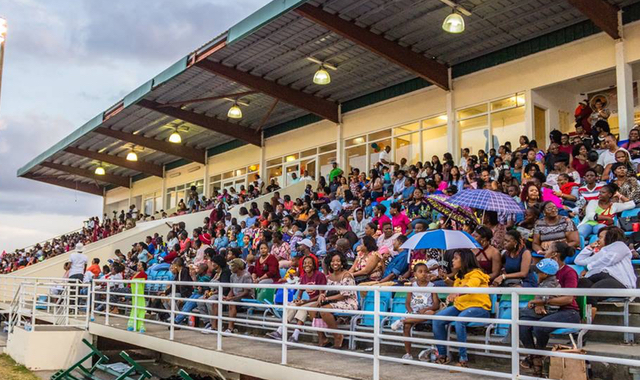 Basseterre, St. Kitts, 19th March, 2018 (MyVueNews.com) – For the third time the Dr. William Connor Primary Schools has won the Primary School Athletics Championships, and a proud principal said it was all about teamwork.

The school emerged victorious on Sunday, 18th March, when its athletes chalked up a total of 34 points at the Kim Collins Athletics Stadium at Bird Rock. The Dr. William Connor Primary School captured 19 gold medals, 3 silver and 12 bronze.

Their nearest competitor was really not too far behind in the Sandy Point Primary School ending the athletics meet on 30 points. They achieved 8 gold medals, 15 silver and 7 bronze.

In third position was the Dieppe Bay Primary School with 13 points.

An ecstatic and proud Principal Jean Nisbett-Boddie said, “Teamwork. It was about teamwork. All stakeholders, the teachers, community persons, parents donors, well-wishers all came together with one intention – for the school to win.”

Speaking to MyVueNews.com, Principal Boddie recalled what is important about the victory.

“It means that hard work brings success,” a lesson for the young athletes and an important message for life.

Continuing, she said, “You must be determined. You must be motivated and put in all effort if you want to win in any game, in any activity that the school might undertake.”

But for Boddie, the win also means the capability of the school to capture the championship, at least up to the year 2020. Fair warning has been served.

Meanwhile, the 2018 Primary Schools Championships has been recorded as one of the largest in its history.

President of the St. Kitts-Nevis Amateur Athletics Association (SKNAAA), Val Henry, said, “For all involved, it was hugely successful, with record numbers in attendance over the two days, but especially on the Sunday. The SKNAAA is very pleased with the high levels of competition displayed by the competing schools.”

SKNAAA President Henry congratulated the Dr. William Connor Primary School for “its impressive victory and for making history in its three-peat performance”.

According to the SKNAAA president, the future of track and field is good, given the performances of the weekend by both the male and female athletes.

Henry said, “We want to encourage the teachers, students and parents to continue their efforts to deliver excellence on the track and field and to continue working with their young athletes in this great sport.”

Again, talking about the successful event, Henry stated, “The SKNAAA also wants to thank the thousands of fans who came out to support the children, and we also express our gratitude to all sponsors, vendors, government, and the hundreds of volunteers that make up the association.”