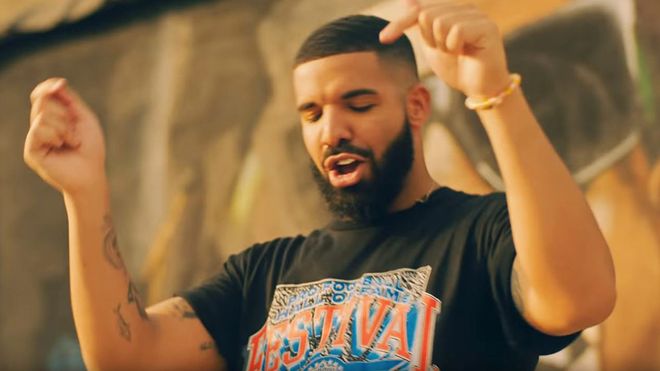 Drake’s In My Feelings: What we learned from the new video Although in many places, the police are warning people not to attempt a related “challenge”, in which people jump out of a moving car and dance alongside it while Drake’s song plays. The official In My Feelings video is eight minutes long, so if you don’t have the time (or data allowances) to watch it right now, here’s what we’ve learned by watching it.

1. Drake has still got the acting skills- Drake is the biggest rapper on the planet but he had some success as an actor in his early years. And he reminds us of this with a Shakespearian introduction as he courts an elusive girlfriend.

2. We finally get to meet Kiki. Or maybe it’s KB. Or ‘Resha. Or JT. There’s more than one girl who gets a namecheck in the song, so at this time – this lady’s name is currently TBC.

3. Drake is not too cool to be shut down by his girlfriend’s mum. His attempts to woo Kiki (or whatever her name may be) are thwarted by the arrival of her mum. “Get your Jordans off my lawn,” she tells him. “And when you leave, don’t forget to go.” Burn.

4. Drake doesn’t actually do The Shiggy. Drake busts a fair few moves in the video, but the one he doesn’t do is The Shiggy – the dance that has helped rocket the song to global success. Dancing Drake is the best Drake.

5. But don’t worry, Shiggy turns up to do The Shiggy. Well hello there extended cameo. This video could be what takes comedian Shiggy from internet sensation to a household name.

6. Drake being Drake, he’s not short of female company.What can we say, he’s a popular guy.

7. But there are no topless women in the video. Hip hop videos have a bad reputation for exploiting women, who are often seen dancing in very little clothing. But the only nipples we see in this video belong to Shiggy.

8. Like all the best narratives, it was all just a dream. Things get meta. Drake seems a little shocked at the idea of dancing in New Orleans with a grill in his mouth – and even the fact that Will Smith had got involved gets mentioned in the video’s finale.

“It was terrible,” he says. The millions of views on the video suggest Drake might be alone in thinking this.