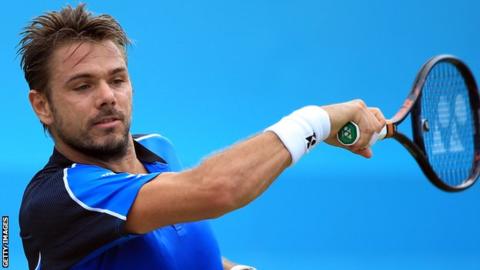 Britain’s Andy Murray has accepted a wildcard into Eastbourne as he continues his comeback after almost a year out with a hip injury.

Murray, 31, made his competitive return on Tuesday at Queen’s, where he lost in three sets to Nick Kyrgios.

The three-time Grand Slam champion said afterwards he was unsure of the best way to continue his return.

“It was good to get back to competition at Queen’s and I’m hoping to building on that next week,” said the Scot.

The Nature Valley International at Eastbourne is the final warm-up event before Wimbledon begins on 2 July.

Former world number one Murray had surgery on his right hip in January and has since fallen to 156th in the world rankings.

He was on court for two hours and 39 minutes against Kyrgios and saved two match points before slipping to defeat.

“I’m looking forward to getting some more time on the grass courts at Eastbourne,” Murray said.

“I played Davis Cup there in 2010 and I know the courts and facilities there are excellent.”

Swiss former world number three Stan Wawrinka, another three-time Slam champion, has also taken a wildcard into the event as he continues his own return from injury.

British number one Kyle Edmund is set to play the event, alongside Canada’s Denis Shapovalov and 2017 Queen’s champion Feliciano Lopez.