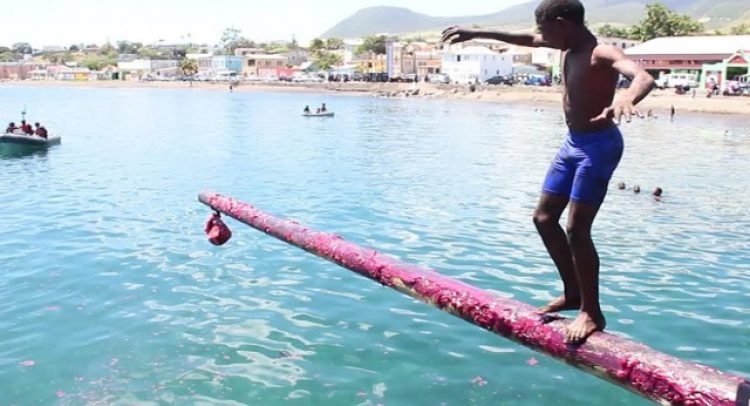 Basseterre, Monday,18th April, 2022,(MyVueNews.com)-One of the longest-running Easter traditions in St. Kitts continued on Monday with the hosting of the Basil Henderson 4H Aquatic Sports Meet at the Basseterre Ferry Terminal.

This is the 65th year since the start of the event, which attracts hundreds of spectators and tens of participants, vying for honours in various competitions.

Event organizer, Winston “Zack” Nisbett said that they have been fortunate this year to double the number of sponsors who have come on board to help keep the tradition alive.

The years of COVID-19, which had its first outbreak in 2020, forced the cancellation for two years.

One returning sponsor is Hobson Enterprises, a leading shipping company in Basseterre that has supported the event for over a decade. A spokesman from the company said that they remain committed to offering support to the initiative because it adds great value to the activities hosted during the Easter holiday weekend.

They indicated that their support is important because the event provides tremendous benefits to so many residents, not only in the Basseterre Valley but from across the island of St. Kitts.

The main attraction continues to be the “fetching” of the ham, which is tied at the end of a greasy pole. It is also perhaps the most difficult event, with most entrants failing to meet the target, only to fall into the ocean below.

But strangely, it is an exercise that excites the spectators, not for the success of securing the ham, but more for the many failed attempts that result in participants skidding across the pole before getting anywhere close to the special prize.

Other events include swimming competitions, boating, boxing, and other forms of entertainment.

It was sometime around 1957 when the first contest was hosted and organized by the head of a youth organization called 4H. Basil Henderson used his youth group to develop what has become a tradition that outlived him and many other founders.

Today, the spirit is allowed to continue through the instrumentality of the new event host, Winston Nisbett, who almost single-handedly, each year, manages to craft a strong program of entertainment that continues to serve as the main Easter Monday holiday attraction in the country.