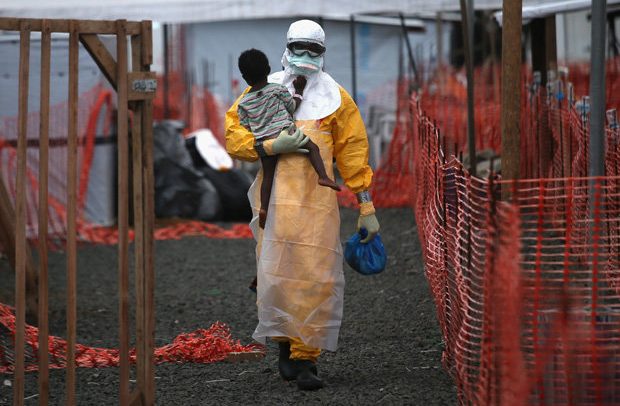 Ebola outbreak EMERGENCY as WHO rolls out vaccine amid epidemic fears ‘to kill 11,000’ WHO officials said ebola vaccinations will start on Sunday in the Democratic Republic of Congo to stop the spread of the outbreak.

The announcement was made at an emergency meeting of the top doctors at their headquarters in Geneva.

WHO today reported 24 “probable or suspected” Ebola deaths and one confirmed fatality resulting from the outbreak in the Democratic Republic of Congo.

At an emergency meeting the organisation was considering whether or not the declare the outbreak a “public health emergency of international concern”.

These deaths spread over countries including Liberia, Guinea and Sirrea Leone.

WHO Director General Tedros Adhanom Ghebreyesus told reporters “we have an evolving situation” and said emergency response teams planned to start administering an experimental vaccine to frontline health workers in Congo by Sunday.

The organisation is discussing whether the government will give approval for the use of Mapp Biopharmaceutical’s experimental ZMapp treatment.

The risk to countries in the region was now “high”, raised from “moderate”, but the global risk remained “low”, the WHO said.

The reassessment came after the first confirmed case in Mbandaka, a city of around 1.5 million on the banks of the Congo River in the northwest of the country.

The case raised concerns that the virus, previously found in more rural areas, would be tougher to contain and could reach downstream to the capital Kinshasa, which has a population of 10 million.

The nightmare scenario is an outbreak in Kinshasa, a crowded city where millions live in unsanitary slums not connected to a sewer system.

Jeremy Farrar, an infectious disease expert and director of the Wellcome Trust global health charity, said the outbreak had “all the features of something that could turn really nasty”.

“As more evidence comes in of the separation of cases in space and time, and healthcare workers getting infected, and people attending funerals and then travelling quite big distances – it’s got everything we would worry about,” he told Reuters.

WHO spokesman Tarik Jasarevic said on Friday that Congo’s Ministry of Health had provided updated figures: 45 cases overall since April 4, including 14 confirmed, 10 suspected and 21 probable. There had been 25 deaths, but no new infections among healthworkers, Jasarevic told reporters.