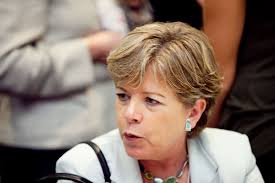 Executive secretary of the United Nations’ Economic Commission for Latin America and the Caribbean (ECLAC), Alicia Bárcena has called for a “new, more inclusive and sustainable development model” for the region.

Bárcena, who is in Paris this week participating in the International Economic Forum on Latin America and the Caribbean and in the OECD (Organization for Economic Cooperation and Development) Forum 2018, among other events, said that, in order to achieve sustainable development, “it is necessary to equalise to grow and grow to equalise”.

She said the aim is to forge “renewed social compacts that enable changing current growth and production patterns and fighting growing inequalities in the region”.

In addressing the 10th International Economic Forum on Latin America and the Caribbean (LAC Forum), Bárcena stressed the need to carry out profound transformations in the region, “just as we have proposed in the institutional document, ‘The Inefficiency of Inequality’, recently presented at our 37th session in Cuba.”

“Inequality is inefficient, not only because it is an ethical failure but also because it is a failure from an economic point of view,” she said. “We must overcome the culture of privilege that reigns in Latin America and the Caribbean.

“Our region has enough maturity to seek its own paths and trails, to define its own institutions that respond to its particular realities and not copy models from other places to combat our inequalities,” she added.

With regard to the need to strengthen employment and institutions, Bárcena emphasised that it is essential to invest in the 165 million young people of Latin America and the Caribbean to ensure that the demographic bonus is not taken over by organised crime, especially drug trafficking.

Speaking earlier this week at the opening session of the seminar, ‘Renewable Energies and Sustainable Cities, New Models for Partnership between Latin America and France’, Bárcena noted that moving toward renewable sources of energy in urban areas is “a fundamental challenge for a region so highly urbanized as ours, where nearly 80 per cent of the population lives in cities”.

She indicated that Latin America and the Caribbean, with its high levels of inequality both as measured by income and in spatial and territorial terms, faces, on the one hand, gaps in energy access and, on the other, unsustainable and polluting patterns of energy consumption.

“For this reason, we promote what we have called ‘the environmental big push’, which requires a package of coherent policies and investments and adequate fiscal stimulus to promote the transformation of the productive structure based on the incorporation of technological progress and the principles of sustainability and equality,” she said.

“Moving toward a sustainable energy matrix in our cities in the context of this environmental big push will necessitate a social and political coalition aligned with its main goals, and the participation of multiple actors,” she added. “It also requires a renewed conversation between the State, the market and society.”

In addressing a panel later on inclusive growth and the empowerment of the State, in the framework of the OECD Forum 2018, Bárcena said that the United Nations’ 2030 Agenda for Sustainable Development and its 17 Goals (SDGs) “represent a historic global consensus in pursuit of a new development paradigm.

“Achieving it is not an easy task, since this depends on initiatives such as the promotion of full employment with greater productivity and equality,” she said.

In this regard, Bárcena said ECLAC has been analysing, in a systematic fashion, the link between equality and efficiency since 2010.

“We have presented evidence that equality, democracy and a thriving economy are complementary forces and that they are mutually supportive,” she said.