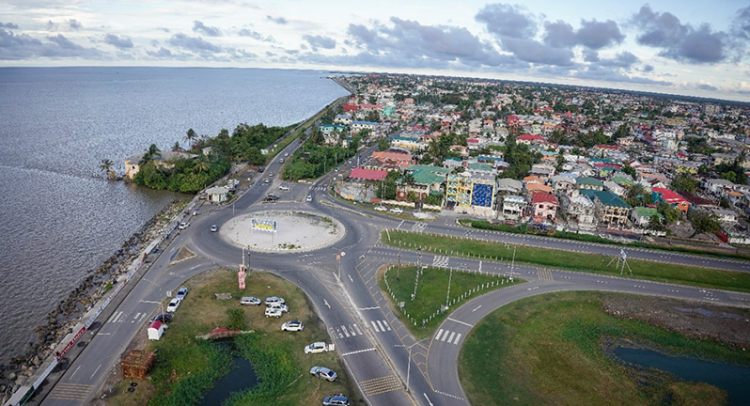 GUYANA’S projected economic growth for 2021, measured through its real Gross Domestic Product (GDP), has doubled from 8.1 percent to 16.4 per cent, according to the biannual International Monetary Fund (IMF)’s World Economic Outlook.
Earlier projections from the IMF indicated that Guyana’s GDP would grow by 8.1 per cent this year, building on the 26.2 per cent real GDP growth projected for 2020. But, in this 2021 Outlook, the IMF reported that Guyana’s GDP grew by 43.4 per cent in 2020 and is now projected to grow by 16.4 per cent in 2021.

The Real GDP is an inflation-adjusted measure that reflects the value of all goods and services produced by an economy (in this case, Guyana’s economy) in a given year. In simpler terms, the real GDP measures a country’s total economic output, adjusted for price changes.

While presenting the 2021 National Budget in February, Senior Minister in the Office of the President with responsibility for Finance, Dr Ashni Singh, noted that Guyana’s growth in 2020 was actually 43.5 per cent. The IMF’s revised growth rate for 2020 (43.4 per cent) is now closely aligned with the figures provided by the senior minister. Meanwhile, in February also, the Dr. Singh projected that Guyana’s economy is expected to grow by 20.9 per cent in 2021.

Looking forward, the IMF projects that Guyana’s economic growth will continue. In 2022, the economy is expected to grow by a further 46.5 per cent. By 2026, economic growth is expected to be about 3.0 per cent.
Cumulatively, the Latin America and Caribbean region is expected to grow by 4.6 per cent in 2021, following the dismal 7.0 per cent contraction recorded in 2020 due to the ramifications of the COVID-19 pandemic. Recovery is expected to continue in 2022, with the region expected to record growth of 3.1 per cent. In 2026, that growth is projected to be 2.4 per cent.
On a larger scale, after an estimated contraction of –3.3 per cent in 2020, the global economy is projected to grow at six per cent in 2021, tapering to 4.4 per cent in 2022.
The IMF, in its April report, posited that with the “unprecedented” policy response, the impact of the COVID-19 recession will be less severe than the 2008 global financial crisis, leaving smaller scars than the 2008 global financial crisis.
“However, emerging market economies and low-income developing countries have been hit harder and are expected to suffer more significant medium-term losses,” the IMF noted. Guyana and the wider Latin America and Caribbean Region falls into this bracket.
The IMF also highlighted that output losses have been greater for those countries that depend on tourism and commodity exports, and for those with limited policy space to respond.

SPECIFIC FOCUS
Meanwhile, as the worldwide vaccination campaign continues, the IMF emphasised that countries’ policies should first focus on escaping the COVID-19 crisis, prioritising healthcare spending, providing well-targeted fiscal support, and maintaining accommodative monetary policy while monitoring financial stability risks.
The IMF suggested that as recovery progresses, policymakers will need to limit long-term economic scarring with an eye toward boosting productive capacity (for example, public investment) and increasing incentives for an efficient allocation of productive resources.
Last week, the World Bank noted that Guyana’s economy will maintain its positive growth trajectory over the next few years, largely due to the burgeoning oil and gas sector.

It is important to note, however, that Guyana’s ‘non-oil’ sectors were adversely impacted by the COVID-19 pandemic, due to measures instituted to mitigate the spread of the novel coronavirus and the effects of the COVID-19 pandemic. Dr. Singh, during this year’s budget presentation, also highlighted that the non-oil sector of the economy contracted by 7.3 per cent.

The tourism, fishing, mining, forestry, manufacturing, services and construction sectors were all impacted by the COVID-19 restrictions, resulting in reduced productivity. There were small increases recorded in the water supply and sewage sector as well as in the electricity sector.

The Senior Minister highlighted that Guyana is rich in natural resources, including oil, minerals, and forests that cover 85 per cent of the country’s territory, making its economic prospects very promising despite COVID-19 and domestic political issues which caused a sharp contraction in non-oil gross domestic product (GDP) in 2020. Prior to the pandemic, Guyana was projected to grow by a massive 86 per cent in 2020.

But, even with the country’s prospects being bright, Dr. Singh told the virtual caucus: “… we also face extreme vulnerabilities to climate change, as well as significant development challenges. We are well aware of the magnitude of these challenges. They include avoiding the resource curse, promoting a strong and competitive non-oil economy, addressing our infrastructure gap, and improving human development outcomes.”