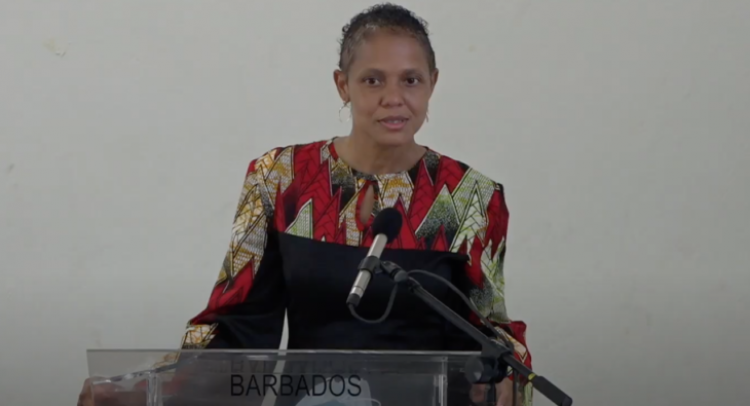 Minister of Education Santia Bradshaw has vowed to continue pressing the Caribbean Examination Council (CXC) for a region-wide waiver of fees associated with a review of this year’s results.

In fact, she revealed that after a meeting of Caribbean Ministers of Education on Tuesday, the regional examining body had agreed to examine the cost implications of waving the fees for all students affected by its “erroneous” results.

The Education Minister was addressing reporters after announcing this year’s Barbados Scholarship and Exhibition winners – a group that could increase, depending on the results of the ongoing review process.

“I believe the general feeling is that [CXC] should be in a position to waive fees for students and that is under consideration at this point in time by the Council, and hopefully by tomorrow we should have a response from CXC as it relates to a general waiver,” Bradshaw told reporters.

“Barbados has made it clear that we will pay for our students, and others in the region might very well follow suit as well, but we have asked for consideration to be given on a regional basis for a waiver of the fees for students who are still desirous of having a review at this point in time,” she added.

The decision followed a meeting between regional education ministers and the CXC to discuss an extensive report presented to them by an Independent Review Team (IRT) that was assembled after weeks of agitation from students and parents.

During a media conference on Sunday, CXC Registrar Dr Wayne Wesley announced a 50 per cent discount on fees to review this year’s exam scripts, putting the cost per exam at US$15.

Nevertheless, Prime Minister Mia Mottley later disclosed that the Ministry of Education would be footing the bill for Barbadian students, amid doubts about the ability of some parents to cover the cost.

During Tuesday’s meeting, it also became apparent that while some governments were willing to follow in Mottley’s footsteps, others could hardly afford the thousands of dollars in review fees.

Pressure groups have also complained about CXC’s failure to accept liability by blaming this year’s problems on the COVID-19 pandemic, high student expectations, and the shortcomings of teachers.

Thus far, CXC has failed to make public the over 25 recommendations of the team, despite promising a full report on Tuesday. Minister Bradshaw, who reviewed the findings expressed satisfaction with the “extensive” report but did not provide many details either.

However, she noted her suggestion that an independent review of CXC’s entire operations should be conducted to aid decision making, even in the short term, to avoid a repeat of this year’s mess at the next sitting.

“Many of the problems that have existed this year existed prior to this year as well, but it has basically flagged a number of other issues that perhaps needed to be addressed a long time ago. What we don’t want, obviously, is that our children this year become the sacrifice for not taking preventative action in the past,” Bradshaw said.

She indicated that no adjustments have been made to the CXC syllabus, but promised that a reassessment of the current approach would occur after further investigation into the inner workings of the regional examinations body and as the COVID-19 situation progresses.

“There are many positives with COVID and one of the positives that has come out of this whole process is that all of us – whether the local registrars, the ministers, the ministries, the teachers and the entire populations of the region – have been able to recognise and understand better how CXC works and how we can improve on what may have gone wrong over the course of the last two years,” the Minister explained.

“We have only just been able to conclude this first phase of the investigation and we are trying to bring resolution to this situation, mindful that a task force would have to be set up and there will have to be further consultation with teachers as it relates to strengthening the communication between the CXC, our teachers and our teachers’ unions, to ensure that appropriate research is done, so that we can understand what has been happening with the results and looking at the papers to determine if we go forward with the existing papers or whether we make modifications with them.”

Over 60 exhibits damaged at Berlin museums, motive a mystery