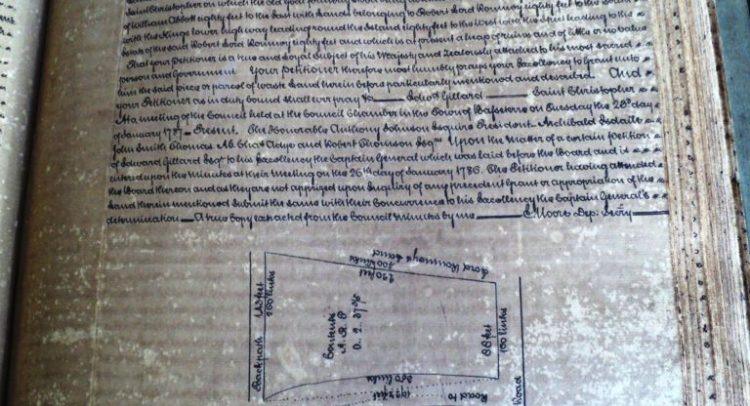 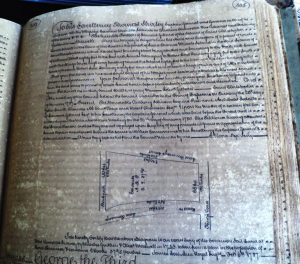 Our document today is a petition by Edward Gillard to Sir Thomas Shirley, Governor of the Leeward Islands. It is accompanied by a plan, first drawn in 1743, for the lot of land mentioned in the petition.

Sir Thomas Shirley was first appointed governor of the Leeward Islands in 1781. In January 1782, when a French Fleet invaded St. Kitts and later Nevis, he realized how badly outnumbered he was and he withdrew the troops and the militia to Brimstone Hill. He remained as Governor till 1795.

Edward Gillard was a merchant and planter. In the 1770s he was resident at Morne estate to the East of Basseterre. The Gillard family had been in St. Kitts at least since the end of the 17th century, perhaps earlier. They were of French origin and probably Huguenots (French Protestants). This may explain why Gillard felt the need to emphasis his loyalty especially so soon after the invasion. In due course, we hope we will find out how he used the land.

But perhaps what is most interesting about this document is not the transaction but the information it provides about the physical environment. From it we know that there was a jail in Old Road. This was to be expected as it had been the main town of the English part of the island. The jail had been abandoned by 1786, may be even by 1743 as there is no indication of a building on the plan. This was probably due to the fact that the administration had moved to Basseterre after 1728.

We are also told that the southern boundary was the King’s lower highway. That corresponds to today’s road. But at the time there was still a highway that cut across higher ground and is no longer in use.

Reading documents carefully sometimes provides little bits of information that help us work out changes in the built environment over time.

Special thanks to Ruth Case for the transcription of the document