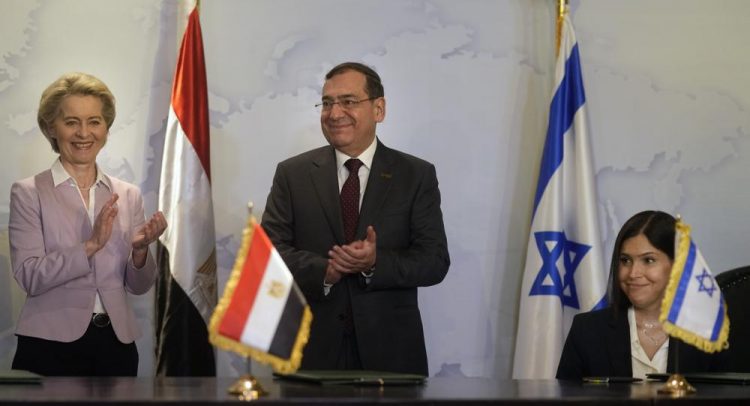 CAIRO (AP) — Egypt, Israel and the European Union on Wednesday signed a deal to increase liquified natural gas sales to EU countries, who aim to reduce their dependence on supplies from Russia as the war in Ukraine drags on.

The deal, stamped in an upscale Cairo hotel, will see Israel send more gas via Egypt, which has facilities to liquify it for export by sea, European Commission chief Ursula von der Leyen said.

“What a special moment,” she said in a joint news conference alongside the Egyptian and Israel energy ministers. “I very warmly welcome the signing of this historic agreement.”

Von der Leyen, who visited Israel earlier this week, said the agreement was part of Europe’s efforts to diversify energy sources away from Russia and import hydrocarbons from “other trustworthy suppliers.” She named Israel and Egypt who have emerged as gas exporters in recent years following major offshore discoveries.

Under the deal, the EU will help Egypt and Israel increase their gas production and exploration in their territorial waters. It was not immediately clear how much gas the EU will import from either country.

“It is known that the Russian war against Ukraine has exposed our European dependency on Russian fossil fuels and we want to get rid of this dependency,” von der Leyen said later in a joint news conference with Egypt President Abdel Fattah el-Sissi.

Last year, the European Union imported roughly 40% of its gas from Russia and has had difficulty imposing sanctions on Russia over its ongoing invasion of Ukraine.

Israeli Energy Minister Karin Elharrar said the deal was a result of Russia’s invasion of Ukraine, which caused a European energy crisis. She said it also highlights increasing cooperation between Egypt and Israel, two former foes.

“This is a statement to those who see in our region only negative forces such as division and conflict,” Elharrar said. “This (memorandum of understanding) shows us that we are paving a new path of partnership, solidarity and sustainability.”

Egyptian Petroleum Minister Tarek el-Molla described the deal as “an important milestone” for cooperation between Egypt, Israel and the EU. He said it will lead to further cooperation between members of the East Mediterranean Gas Forum, which includes Jordan, Israel, Cyprus, Greece, Egypt, the Palestinian Authority, France and Italy.

In 1979, Egypt became the first Arab country to make peace with Israel. But economic agreements have been controversial in the Arab world’s most populous country, where popular support for the Palestinians runs high. Relations between the two countries have been steadily warming in recent years.

According to the deal, the Israeli gas will be brought via pipeline to Egypt’s LNG terminal in the Mediterranean Sea before being transported by tanker to European shores, Israel’s Energy Ministry said.

Israel has two operational gas fields off its Mediterranean coast containing an estimated 690 billion cubic meters of natural gas combined and a third offshore rig is in the works. It has already signed gas export agreements with neighboring Egypt and Jordan.

Egypt, with recent major discoveries, exported 8.9 billion cubic meters of natural gas in 2021 and 4.7 billion cubic meters until May this year, according to Refinitiv Eikon, a global provider of financial and market data. Most of the exports, however, go to Asian markets.

El-Sissi and von der Leyen meanwhile held talks that focused on the food crisis caused by the Russian invasion of Ukraine. Egypt, the region’s most populous nation, has been impacted badly by the war in Europe, which has shaken the global economy.

The European official said the EU will provide 100 million euros (around $105 million) for “immediate relief” to help Egypt, the world’s biggest wheat importer, address food insecurity in the short term.

“This will hopefully help to increase the grain storage capacity and will provide finances for rural businesses and farmers” in Egypt, she said.