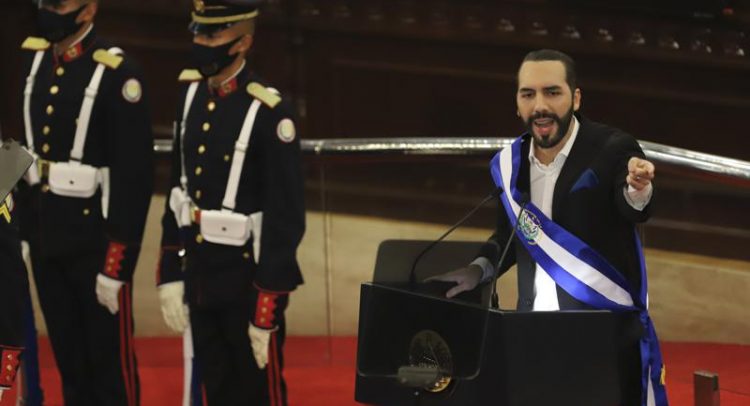 SAN SALVADOR, El Salvador (AP) — El Salvador’s Legislative Assembly has approved legislation making the cryptocurrency Bitcoin legal tender in the country, the first nation to do so, just days after President Nayib Bukele made the proposal at a Bitcoin conference.

The digital currency, originally created to be money out of the control of governments, can be used in any transaction and any business will have to accept payment in Bitcoin, with the exception of those lacking the technology to do so. The U.S. dollar will also continue to be El Salvador’s currency and no one will be forced to pay in Bitcoin, according to the legislation approved late Tuesday.

“Every restaurant, every barber shop, every bank….everything can be paid in U.S. dollars or Bitcoin and nobody can refuse payment,” Bukele said in an hour-long social media hangout with thousands of U.S.-based Bitcoiners as the bill was being debated Tuesday night in El Salvador’s congress.

The exchange rate between the two currencies will be established by the market and all prices will be able to be expressed in Bitcoin — though for accounting purposes, the dollar will continue to be the currency of reference.

The government will promote training for people to be able to carry out transactions using Bitcoin, which has been used for people trading in black markets to avoid government oversight.

The Economy Ministry noted that 70% of Salvadorans do not have access to traditional financial services and it said the country “needs to authorize the circulation of a digital currency who value exclusively follows free market criteria” to stimulate growth.

“The Bitcoin law is ambitious, but simple,” Bukele said on Twitter. “Furthermore it is well structured to have zero risk for those who do not want to take risks. The government will guarantee the convertibility to the exact value in dollars at the moment of the transaction.”

The law would create mechanisms to help Salvadoarans, especially small businesses, quickly convert payments they receive in Bitcoins into dollars — helping them avoid the risk of the value plummeting, as it had in recent days

The legislation established a government fund that will guarantee the automatic convertibility to dollars.

“They have to take the Bitcoin, but they don’t have to take the risk,” Bukele said. “We might earn some money or we might lose some money, but it doesn’t matter. The purpose of the trust fund is not to make money but to support making Bitcoin a legal tender.”

That $150 million fund was the aspect of the legislation drawing immediate attention.

“I don’t know how they’re going to sustain this trust, because if they have all these bitcoins coming in and all these dollars coming out for the Bitcoins, because they’ll be freely interchangeable between the two, that’s going to be a way to clean dirty bitcoins,” said David Gerard, author of “Attack of the 50 Foot Blockchain.” Without very rigid controls on Bitcoin movements and full know-your-customer rules, “they’re going to be a laundromat for money.”

Additionally, Bukele said that anyone who invests three Bitcoin in El Salvador—currently about $105,000— will be entitled to permanent residency.

Bukele said he would discuss his plans with the International Monetary Fund on Thursday. He denied that the move was an attempt to de-dollarize the economy.

“The objectives of having the U.S. dollar as legal tender are replicated on steroids with Bitcoin,” he said. “It’s going to help having both currencies as legal tender.”

The law will take effect 90 days after its official publication. The Central Bank and financial system regulators will publish the implementing rules in the interim.

Bukele’s New Ideas party holds a supermajority in the new congress seated May 1. On its first day it ousted the justices of the Constitutional Chamber of the Supreme Court and then replaced the Attorney General, leading to concerns from the United States and others about Bukele’s concentration of power.

Other countries in the region, including Venezuela and the Bahamas, have introduced digital currencies, though none had adopted the original cryptocurrency, Bitcoin, itself.

Bitcoin, intended as an alternative to government-backed money, is based largely on complex math, data-scrambling cryptography — thus the term “cryptocurrency” — lots of processing power and a distributed global ledger called the blockchain, which records all transactions. No central bank or other institution has any say in its value, which is set entirely by people trading Bitcoins and which has wobbled wildly over time.

Bitcoin and other popular digital currencies, including Ethereum and Dogecoin, all rose on Wednesday according to the tracking site Coindesk. Bitcoin, which climbed above $60,000 early this year, was up 10% to $36,050.

Carlos Carcach, a profesor at El Salvador’s Superior School of Economics and Business, argued that adoption of Bitcoin as legal tender “is not necessary, nor convenient,” though he added, “as long as there is someone who accepts payment with Bitcoin, the same as they accept dollars, there wouldn’t be problems.”

He noted that Bitcoin is extremely volatile, so investors “run the risk of becoming rich and the next day being poor.”

Opposition lawmaker Rodrigo Ávila of the conservative Arena party complained that the legislation was not sufficiently discussed by the Legislative Assembly before passage. There was no testimony from economic or cybercrime experts.

U.S. officials have said Bitcoin was used to pay the ransom in the cyberattack of Colonial Pipeline that caused the operator of the nation’s largest fuel pipeline to halt its operations last month.

El Salvador’s move rekindled memories of the Nov. 30, 2000, decision to dollarize El Salvador’s economy, an action taken in the middle of the night by the Arena-controlled congress.

El Salvador received some $6 billion in remittances from Salvadorans living abroad last year, about 16% of the country’s gross domestic product. Bukele has said Bitcoin could eliminate the costs of sending that money home.

“This is not something for rich people only. It’s for everybody,” said the 39-year-old Bukele, who waxed philosophically about the power of cryptocurrency to loosen the control of central banks and empower young entrepreneurs.

“We build our own future. So why do we have to resign ourselves to a dystopic future?” he said, adding that he’s enjoying the moment without fully understanding the shift in international finance his tiny homeland may have triggered. “This will be a huge gamechanger not for El Salvador but for the world. It’s beautiful to be part of a huge change in humanity.”

AP writer Joshua Goodman in Miami and Christopher Sherman in Mexico City contributed to this report.