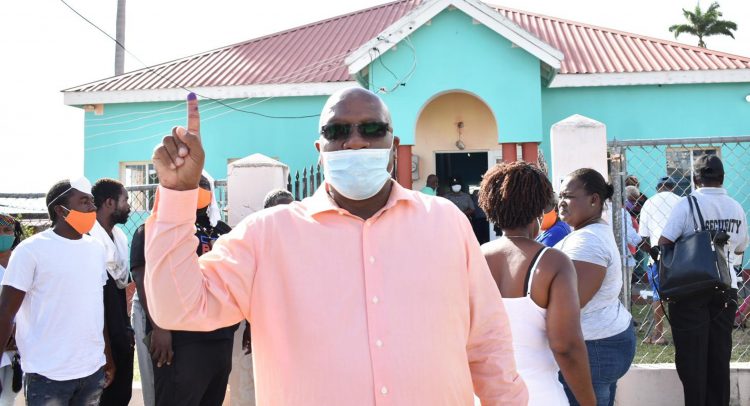 Prime Minister, Dr the Hon Timothy Harris, led Team Unity’s Dream Team to an eight-seat National Assembly victory in the Friday June 5 General Election, earning a second five-year term in government even with results for two seats yet to be declared at the time going to press.

From the released results, following the successfully held Friday June 5 General Election held under Emergency Powers (COVID-19) Regulations, Team Unity had bagged eight seats. The St. Kitts Nevis Labour party had lost two of the three seats it held, and the NRP had lost its single seat to Team Unity candidates. Results from St. Christopher One and St. Christopher Eight had not been released at the time of going to press.

Defending the St. Christopher Seven which he first won in 1993, the National Political Leader of the Peoples Labour Party (PLP) Prime Minister Dr the Hon Timothy Harris who voted at the community centre in Stone Castle, Tabernacle Village, received a total of 1,870 votes against the St. Kitts Nevis Labour Party candidate Mr Leon Natta-Nelson who could only muster 607 votes.

The Honourable Prime Minister beat the St. Kitts Nevis Labour Party candidate by a whopping 1,263 votes, which he acknowledged was the best performance ever in Constituency Number Seven.

Counting of the votes cast at the various polling stations across the eleven constituencies started immediately after the polling stations closed. The first declared results announced by Supervisor of Elections Mr Elvin Bailey, which came shortly before 11:00 pm, were those of Nevis Ten (Gingerland) where the Hon Eric Evelyn of the CCM annihilated his NRP rival, Mr Bjorn Hanley, by beating him 710 votes to 167 votes.

Those results were closely followed by the results from Nevis Eleven (St. James and St. Thomas) where the Hon Alexis Jeffers of the CCM opened a new chapter in Nevis politics when he won the seat by 1,107 votes. Defending was the 20-year holder of the seat, Hon Patrice Nisbett of the NRP who got 910 votes. The CCM has never won that seat, and the win has effectively ended NRP’s presence in the Federal National Assembly.

In other results, the Hon Lindsay Grant of the People’s Action Movement overcame a two-pronged challenge to retain the St. Christopher Four seat by garnering 1,284 votes. He beat Mr Steve Wrensford of the St. Kitts Nevis Labour Party who received 933 votes, and independent candidate Mr Jason Thomas who received a mere eleven (11) votes.

Youthful Ambassador Jonel Powell, Chairman of the People’s Action Movement, was making his second attempt at the seat having lost narrowly in 2015. This time around, with the youth in the constituency firmly behind him, he was able to dislodge two-term parliamentarian, the Hon Marcella Liburd, by gaining 1,654 votes against her 1,422 votes.

In St. Christopher Six, Political Leader of the St. Kitts Nevis Labour Party Dr Denzil Douglas who would have been ordered to vacate the seat by the Eastern Caribbean Supreme Court of Appeal in March reclaimed it after winning by 1,553 votes. Challenging him for the seat was PLP’s Mr Kevin ‘Ninky’ Williams who received 519 votes.

Constituency Number Six is a traditional Labour seat and what is instructive is the fact that the 519 votes scored by the PLP candidate who was campaigning under the slogan ‘Try Something Else’ is the highest number of votes ever amassed by any candidate running against Dr Douglas.

Photo: Prime Minister Dr the Hon Timothy Harris after he voted at the community centre in Stone Castle, Tabernacle Village

Jamaica among countries praised by CHTA for new tourism protocols