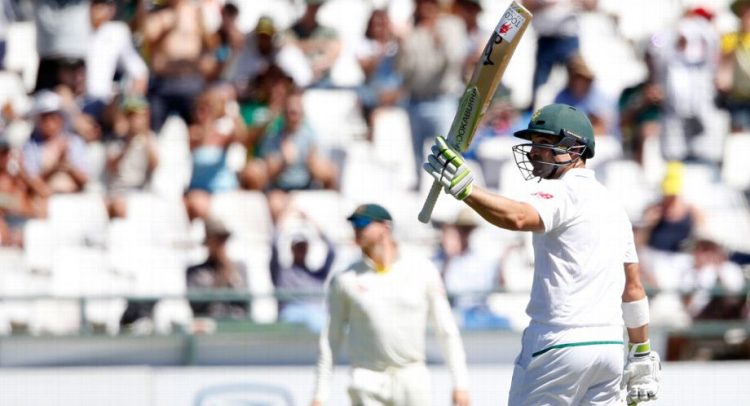 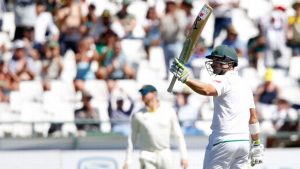 Dean Elgar was eyeing off his first Test century for the year at tea in Cape Town, where he and AB de Villiers  had set down a very solid platform for South Africa in the third Test against Australia. After Faf du Plessis won the toss for the first time in the series, South Africa moved comfortably to 185 for 2 at tea, with Elgar on 91 and de Villiers on 46. Josh Hazlewood had picked up both of the wickets, one in each session of what had so far been a challenging day for Australia.

Elgar had shown plenty of positivity in striking 14 fours and one six, which was lofted down the ground off Nathan Lyon, and had brought up his half-century from his 97th delivery. At the other end, de Villiers had been typically intent on a quick tempo, and had struck seven fours during his 69-ball stay, having been promoted up the order to No. 4 ahead of du Plessis. De Villiers punished anything short, and by tea his partnership with Elgar was worth 93.

Australia had missed a couple of opportunities to send Elgar back to the dressing room, most notably on 53 when Lyon put down a straightforward chance at point off the bowling of Hazlewood. Close to the tea break, Elgar had another nervy moment when an edge off Mitchell Marsh flew wide of the diving second slip Steven Smith, who narrowly failed to get his hand to the ball and cling on. Opportunities had been few and far between for Australia on a surface offering little assistance.

Hazlewood had broken through in the fourth over of the match with a textbook new-ball delivery, moving the ball away on a good length to take the edge of Aiden Markram’s bat on the way through to Smith at second slip. Markram’s 11-ball duck ended the opening partnership at 6, but the ensuing partnership between Elgar and Hashim Amla was worth 86 as they steadied South Africa and took them to a good position at lunch.

Amla fell soon after the break for 31, when he failed to control a hook off Hazlewood and saw his top edge taken by Pat Cummins in the deep. That left South Africa at 92 for 2, but Elgar and de Villiers ensured there was no further loss during the session.

South Africa had made two changes to their line-up, with Temba Bavuma returning from injury to replace Theunis de Bruyn, and Morne Morkel recalled at the expense of Lungi Ngidi. Australia picked the same XI that had played in the first two Tests.