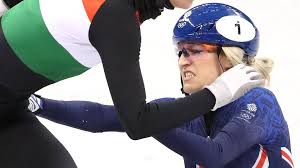 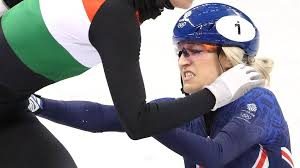 Briton Elise Christie’s hopes of a medal at the 2018 Winter Olympics are over after she was disqualified in her 1,000m short track heat.

The 27-year-old – who appeared to be in significant pain because of an ankle injury – finished second after her fall on the first lap led to a restart.

But the judges deemed her to have committed an offence during the race which resulted in her disqualification.

It was a sad end to another disappointing Games for the Scot – a triple world champion, including in the 1,000m – who was carried out of the skaters’ area after the race.

Christie, who was disqualified in all three of her events at Sochi 2014, fell in the 500m final and suffered the same fate in Saturday’s 1500m semi-final.

The British skater told BBC Sport that despite her continuing disappointments in the Olympics, she is targeting a return at Beijing 2022.

“You’ll have to ask me tomorrow [Wednesday] how I feel,” she said. “I’m a bit shell-shocked. I worked so hard to get back from this injury. I promise Britain I will fight back from this and I will come back in Beijing and hopefully I can do Britain proud then.

“I have so much belief in the programme and in myself. It wasn’t through a lack of capability, it was just short track. What else can I say? Everyone has been a massive support – most of the people anyway.

“It’s just frustrating having to wait four more years – it just wasn’t meant to be this time. I would just like to thank all the kids who have sent me messages saying they are inspired.

“They have no idea how much that means to me. The fact five, six, seven year-olds find me inspiring brings tears to my eyes.”

She also queried the decision to penalise her in her heat.

“I don’t know how I got a yellow card,” added Christie. “I have never had one in my life. I went up the inside and I passed the girl. I have no idea.

“The only thing I can think of is if the referee doesn’t think I was safe enough to race. I can see why he might not want me to race like that. He was encouraging me to get off the ice.”

Getting rid of acne: Tools and techniques for extractions