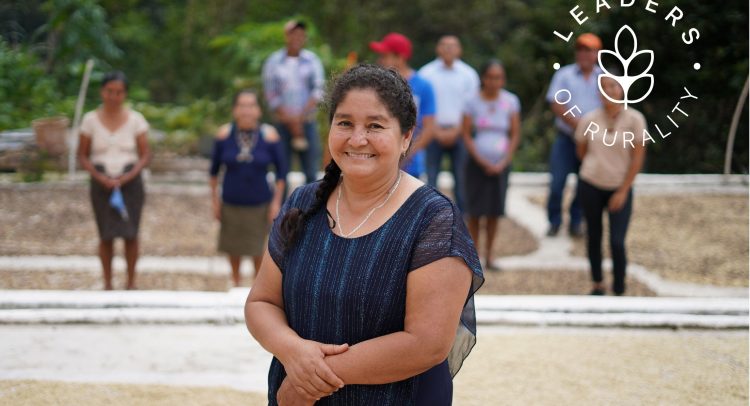 San Jose, June 1, 2021 (IICA). Elvia Monzón, coffee producer and president of the Rancho Viejo Coffee Growers Association (AIDEC) in Guatemala, will receive the “Soul of Rurality” award, which is bestowed upon noteworthy Leaders of Rurality in the Americas by the Inter-American Institute for Cooperation on Agriculture (IICA).

“This award pays tribute to those who are playing a unique dual role: guaranteeing food and nutritional security by producing under all circumstances and protecting the biodiversity of the planet. It will also emphasize their capacity to be positive role models in the rural areas of the region”, stated Manuel Otero, Director General of IICA.

Within the framework of the initiative, IICA will also strive to ensure the recognition opens up opportunities for cooperation with state, civil society, and private sector organizations to gain support for the awardees’ causes.

“These are people whose influence can be seen in the food that we eat—wherever it may end up—and in each plot of agricultural land and in communities where farmers and their families live. These are men and women who are leaving their mark and are the soul of rurality because they produce, plant, harvest, create, innovate, and unite”, reflected IICA’s Director General, upon launching the initiative.

“They embody silent leadership, which is something we should spotlight and recognize. Above all, they are role models because they transform, overcome adversity, and inspire”, he added.

On her 50th birthday, Elvia Monzón received a gift she’ll never forget: the roaster of her dreams for Rancho Viejo Small Producers Integrated Cooperative, the organization she heads in San Antonio Huista, Guatemala.

“It was an unforgettable coincidence”, assured the coffee grower. “On February 19th, my birthday, PROCAGICA surprised us with the roaster. I looked at that beautiful thing and didn’t have a clue how to use it”, she laughed.

But for Elvia, a natural leader, that was a minor issue. The roaster was delivered just weeks before the Covid-19 pandemic exploded and so quarantine delayed training on how to use it. “We learned on our own, watching the roasters on the first visit, and the coffee came out excellent”.

The coffee roaster was given as part of a program sponsored by PROCAGICA (Central American Program for Integrated Coffee Leaf Rust Management), with the aim to strengthen producer organizations and improve their integration in the coffee value chain. With it, the organization can generate added value and sell its product at a higher price.

Elvia grew up in San Antonio Huista and was trained in coffee farming from a young age.

“My father grew coffee and from the time I was seven years old, he would take me with him to pick. Back then, people didn’t come from other places for the harvest—we did it ourselves within the family”, she recalled. “When I was 17, he gave me about two acres of land. I’ve had my own seedbed and plantation since then”.

While she was still single, her brothers would help her pick and they would collect about 15 quintals from the land. She married at age 20 and life was normal until 2001, when her husband emigrated to the United States and she was left to care for their four young children, ages 12, 10, 5 and 3. Elvia did not lose her will to persevere, however.

“My children were my reason to keep going; I wanted to work hard for my family. Since I produced coffee, I needed training on how to improve production, so I approached a group of friends and joined AIDEC”—the Rancho Viejo Coffee Growers Association.

“It wasn’t easy for me—the men would ask me why I was training if I couldn’t do the work alone anyway, but I always defended myself by saying that I could share what I learned with other people,” she said.

“After I joined, I started encouraging other women so they could receive support from the different institutions and two others joined two years later,” she added.

Elvia’s leadership has been acknowledged by the Guatemalan National Coffee Association, Anacafé.

“She motivated more women”, said Magdali Martínez, a specialist in integrated development with the entity.

“Ms. Elvia has influence and the community’s male leaders recognize her leadership and respect her. There was some resistance at first, but now they recognize her and her own organization selects her to lead all its projects”, she continued.

Female participation in production organizations is key, said María Febres, IICA Representative in Guatemala. “They have demonstrated leadership and perseverance and inspire the trust of their members thanks to the results they have achieved. The road is not easy—they have to work hard and prove they can contribute to change, thereby breaking the stereotypes and taking on leadership roles with more and more responsibility”.

When Elvia took control of AIDEC in 2015, she had added ten more women. In 2017, the organization was converted into a cooperative and she became its president. Today, the organization has 56 members, 15 of which are female.