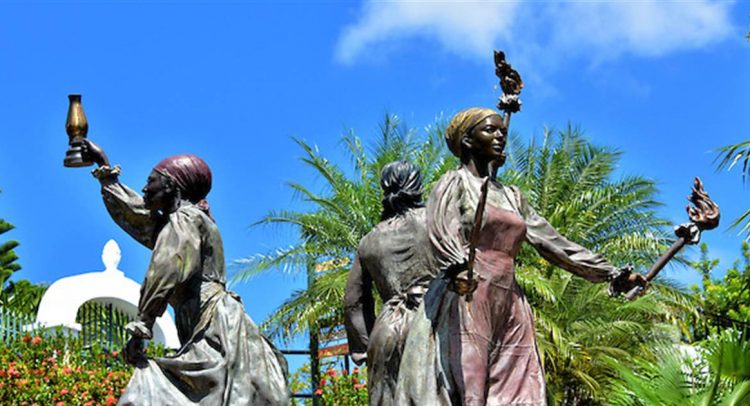 Basseterre, Saturday, 1st August, 2020, (MyVue News.com)- Some 182 years ago today, on 1st August, 1838, the greatest injustice against mankind ended, when the British Government of the day, was forced to abolish the horrific enslavement of hundreds of thousands of black Africans in the Caribbean, including St. Kitts & Nevis.

It was an illegal act against humanity, though protected by British laws and regulations, resulting in the murder, torture and subjugation of so many who were kidnapped from their homeland in West Africa.

Today, almost all black inhabitants of the now independent Caribbean countries are descendants of the victims whose life of bondage, still has graphic evidence, with shackles in the cellars of the buildings surrounding Independence Square, St. Kitts, the site where the white plantocracy and purveyors of the enslavement, occupied as colonial homes and businesses.

For approximately 400 years, a combination of slavery, colonialism and Christianity, propped up a social and economic network, that fashioned for black people, an existence of poverty, broken families, lost culture, denial of education, no basic human rights and no access to economic wealth.

Sadly though, once again, today will pass without much acknowledgement from those of us who benefit today, from the sufferings and sacrifices of the forebears who perished.

Many Caribbean nations have, over recent decades, come to grips with the importance of the day, and have proclaimed the 1st August, each year, a national public holiday, for reflection and measured celebration.

Unfortunately, in other territories, including St. Kitts and Nevis, not only is there no holiday, there exists very little effort, not by the colonialists or enslavers, who are long gone, but by the African descendants themselves, who are now positioned, both politically and socially, to correct an ongoing oblivion.

While celebratory activities for one of the greatest achievements against the most unjust actions of the past are ideal, citizens rejoice, not knowing the true meaning of the occasion, thinking it is a time only for frolic, but unaware of its significance and relation to their heritage and history.

And not much is done to educate otherwise.

To mark the occasion, it would be helpful to organize a ringing of bells by all churches, throughout each parish, on each island; official church services, on St. Kitts and also Nevis; public address by the head of government and or head of state; poetry reading about the greatness of our people and also about our freedom story; erection of monuments and wreath-laying services; songs and stories about the struggles of black people, from the days of enslavement to the present; recognition and teachings of our patriotic heroes, both men and women, from centuries ago, and the present; community projects and activities; presentations about cultural values and the highlights of our heritage, in food, music, art, dress, drama and dance.

Perhaps this was what the founders of Nevis’ Culturama envisaged when the festival was conceived in February 1974, by the Nevis Dramatic and Cultural Society (NEDACS). But somehow, the reality today, is different.

In addition, it would be ideal to incorporate commemoration of the Christena Disaster, which shares the same anniversary, into emancipation activities.

Kudos though must be showered on the Rastafarian community that has largely been the main group of conscious citizens, who truly embrace Emancipation Day, (on the day of the actual milestone), August 1st, rather than the misguided celebrations of a misnomer, “August Monday”.

The church too, of late, has been making an improved effort to celebrate Emancipation Day, with formal services.

Though still stigmatized and ostracized by most of the so called sophisticated society today, somehow, the rasta women and men, always seem to get it right, knowing what is culturally appropriate and needed, while those of us, bald headed descendants, remain in a stupor.

This year, but without much public and national support, the National Reparation Committee, has organized a series of awareness events, to bring some cultural maturity to a runaway train of ignorance, by too many.

The white British planters are reported to have received 20 Million pounds for their “loss” when the enslaved were freed ‘again’. In contrast, in 2020, black people are still trying to get reparation.

They have not even gotten an apology from France, England, Spain, the Dutch, and other European nations that facilitated and engineered slavery.

Not even the prevailing “Black Lives Matter” movement in the United States, and now worldwide, which many here shout about, seems to have awoken the consciousness of Caribbean Africans, including here in St. Kitts & Nevis, that the time has come for greater priority to be placed on the significance of Emancipation Day.

In the United States, both blacks and whites are agitating for change and for statues of former racist oppressors and guardians of slavery there, to be removed and replaced with more acceptable representations.

St. Kitts and Nevis too, needs such as renaissance.

Almost all of the relics on display for tourists and the history taught to our children in school, are about those who facilitated slavery and colonialism.

No monuments yet for so many who have contributed positively to the advancement of the majority of our citizenry.

Worse, after 182 years, no monument to memorialize the victims of slavery, and its abolition-Emancipation.