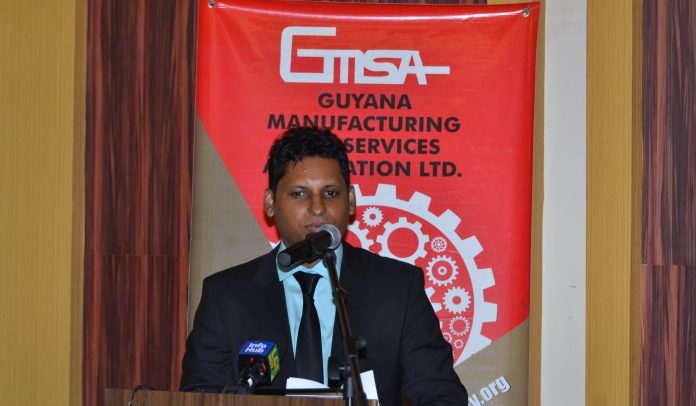 “For Guyana, the emerging oil and gas sector will present opportunities as well as challenges. The movement of goods and services in our region as provided for under the CSME, the national debate on local content, contracts and agreements etc. These developments could test the legislative framework at the national level, and possibly the CCJ.”

These were the words of the Guyana Manufacturing and Services Association (GMSA) President Shyam Nokta during the Business Luncheon on Thursday at the Pegasus Hotel, Kingston that saw the presence of the incumbent President of the Caribbean Court of Justice (CCJ) Justice Adrian Saunders.

According to Nokta, being physically removed from most of its jurisdictions, the relevance and importance of the CCJ may feel disconnected for many societies. However, in recent times, Guyanese have been paying a lot of attention to CCJ and its decisions.

Judicial independence and expediency are crucial to national development, Nokta stressed. He said by providing a final tier of appeal, the CCJ, since its establishment, has played a significant role in upholding the rule of law.

As it relates to the relevance of the CCJ to the private sector in Guyana, Nokta noted that accessing regional markets through the Caribbean Single Market and Economy (CSME) had been very challenging over the past years, and with the emerging oil and gas industry, these issues will continue to attract the attention of the CCJ.

He also pointed to several high profile cases adjudicated under the CCJ, such as the case of Trinidad Cement Limited and TCL Guyana Incorporated v Republic of Guyana [2009] and more recently, the case of the Suriname-based beverage company RUDISA on the issue of the environmental tax which he said brought into focus the rules of the CSME.

Meanwhile, the CCJ President affirmed that the rule of law will play an important role in making sure the benefits of Guyana’s emerging oil and gas sector are widespread and sustainable.

He noted that “CCJ has particular relevance to Guyana at this time, as the country is poised for a significant economic takeoff…the economic prospect of this country could easily make it the envy of its CARICOM sister states, and some Latin American states as well…the basic ingredients are present for this to occur, your large and fertile landmass, your oil deposits, and precious metals, the abundance of rivers and country’s natural beauty.”

This economic progress, he said, can be thwarted or it can be significantly enhanced with good governance and faithful adherence to the rule of law. The rule of law in this sense implies, legal accountability, fairness, respect for minorities, the observance of human rights, judicial independence, separation of powers and equality.

Justice Saunders pointed out that ultimately the people will look to the CCJ and the courts in Guyana for setting appropriate standards in these matters. “In a multicultural and multiethnic society as Guyana is, those courts will have a special responsibility to ensure equality of treatment.”

The CCJ President said that adherence to the rule of law will increase business confidence, attract investments and ensure respect for and enforcement of property rights and freedoms. An important feature of the rule of law, Justice Sanders reminded, is ensuring proper access to the courts and justice, and the CCJ has an enormous stake in this goal.

He noted that dialogue such as this luncheon was very important as it provides a welcome opportunity for the judges to learn and understand the culture and values of Guyana and therefore help create accurate, sensitive and fair decision making.