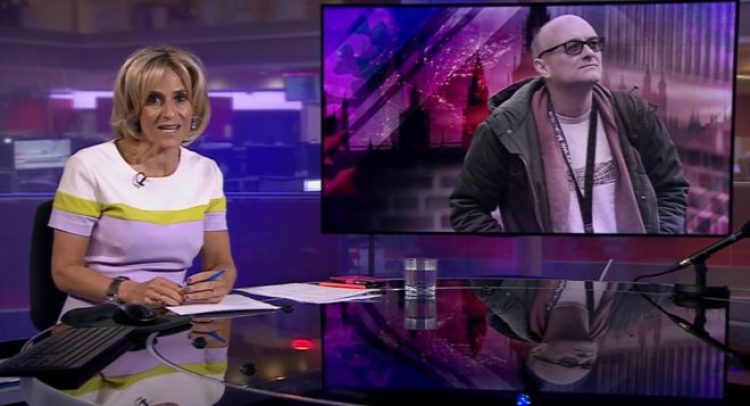 Emily Maitlis: I asked for night off from BBC’s Newsnight

Newsnight presenter Emily Maitlis has said she did not present the BBC Two programme on Wednesday because she had “asked for the night off”.

She was responding to suggestions that the BBC had replaced her after ruling her introduction about Dominic Cummings on Tuesday broke impartiality rules.

The BBC said her wording “risked giving the perception that the BBC was taking sides, and expressing an opinion”.

But the corporation insisted she had not been removed or suspended.

Maitlis tweeted on Thursday morning to say she had been “overwhelmed by all the kindness, messages – and support on here – and I’ve probably missed much of it. A big thank you from us all at #newsnight”.

Maitlis is not scheduled to present the show again this week – Emma Barnett is fronting Thursday’s programme, with Kirsty Wark on Friday.

In a statement on Thursday, the BBC said its public ruling about Maitlis’s script was not about “apportioning blame to anyone”.

It said: “Our editorial guidelines allow us to make professional judgments but not to express opinion.

“The dividing line can be fine, but we aim to say so if we think we have overstepped the mark.

“The introduction to Newsnight was intended as a summary of the issues that would be explored, with all the supporting facts and evidence, in the programme. But as broadcast, it risked giving the perception that the BBC was taking sides, and expressing an opinion, rather than being impartial.

“It said that ‘the country’ was ‘shocked the government cannot see’ Dominic Cummings broke lockdown rules; that he ‘made those who struggled to keep the rules feel like fools’.

“But there are some who do not share this opinion, nor think that the issue is a ‘scandal’ or the prime minister has displayed ‘blind loyalty’.

“By presenting a matter of public and political debate as if the country was unanimous in its view, we consider Newsnight risked giving the perception that the BBC was taking sides – or that the introduction constituted the presenter’s opinions, rather than a summary of the journalism which would follow, which explored these issues rigorously and fairly and, crucially, with the supporting evidence.”

Maitlis’s introduction also said the “public mood” was “one of fury, contempt and anguish”.

She continued: “The prime minister knows all this. But despite the resignation of one minister, growing unease from his backbenchers, a dramatic early warning from the polls and a deep national disquiet, Boris Johnson has chosen to ignore it.

“Tonight we consider what this blind loyalty tells us about the workings of Number 10.”

In a statement on Wednesday, the BBC said: “While we believe the programme contained fair, reasonable and rigorous journalism, we feel that we should have done more to make clear the introduction was a summary of the questions we would examine, with all the accompanying evidence, in the rest of the programme.

“As it was, we believe the introduction we broadcast did not meet our standards of due impartiality.”

Mr Cummings’ 260-mile journey has been the focus of intense media scrutiny since coming to light last week.

On Monday, the prime minister’s most senior adviser explained that he decided to make the trip because he felt it would be better to self-isolate in a place where he had options for childcare if required.

Boris Johnson has ruled out an inquiry into his adviser’s conduct, insisting it was time to “move on” from the row.

On Thursday, police said Mr Cummings’ trip from Durham to Barnard Castle, about 30 miles away, “might have been minor breach” of lockdown rules, but that no action would be taken against him.

“Durham Constabulary view this as minor because there was no apparent breach of social distancing”, the force said.