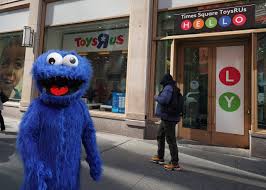 ‘End of an era’: New York shoppers glum at Toys ‘R’ Us

The Toys ‘R’ Us in Times Square, in the heart of Manhattan, all is more or less normal — noisy gizmos for sale drown out the store’s background music, and employees stand at the ready.

But the few New Yorkers and tourists browsing the aisles on Thursday are in disbelief that the wonderland of their youth is closing down.

Toys ‘R’ Us announced that it would liquidate its US operations — shutting down all 735 stores in a move that could slash 33,000 jobs, and finally falling victim to heavy debts and the internet buying culture.

“It’s like an end of an era,” Jorardo, a 30-year-old Brooklyn resident, told AFP, saying he has been shopping at the retail chain since he was four.

“It’s like a big chunk of my childhood is gone,” he said. “It was not all about shopping, it was the experience, going in — it was the best place to hang out.”

“Where does a kid have to go now?” he said, lamenting that the youth of today will not know brick-and-mortar shops, and instead will turn to online retailers like Amazon.

At this three-storey shop in one of New York’s splashiest neighbourhoods, many display cases and shelves sit empty. One employee doodles on a blank sheet of paper.

Roger Malone, who lives in Harlem, ventures into the store, looking for superhero figures from the hit film Black Panther for his three children.

“It’s going to be a loss because they are not going to get a physical experience to come into a store.”

The chain saw the first signs of trouble in Manhattan in 2015, when the company shuttered its Times Square flagship, which had featured a giant Ferris wheel and huge Barbie dream house.

The firm then opened a smaller store in the area.

Thirty blocks south, at Union Square, the impact of the online shopping revolution is even more acute.

The Babies ‘R’ Us — the baby brand launched in 1996 — store is nothing but a shadow of its former self, with banners boasting discounts up to 60 per cent.

Cardboard boxes litter the store, while some areas are vacant, save for a few stray strollers discounted up to 40 per cent.

Employees roam the aisles and chat in small groups, but say they have been told to shy away from media.

Brooklynite Vicky came in seeking a discounted stroller, and called it “sad” that the decades-old chain could not stay afloat.

The Babies ‘R’ Us store will close on March 31.

Started in 1948, Toys ‘R’ Us was a retail force throughout the 1980s but, facing pressure from larger stores with deeper discounts as well as the online retail boom, it was taken private in 2005 by a consortium of investors that included the KKR Group and Bain Capital.

The move saddled the company with billions of US dollars of debt, leading to a chain of events that ultimately resulted in Thursday’s motion to liquidate all US operations.

Back in Times Square, the security guard at Toys ‘R’ Us greeted shoppers with a smile and a cheery “Good morning!” but admitted the future was gloomy.

“I’m waiting to see what happens,” said the man, who gave only his initials, AP.

Nevis Geothermal ready for next phase