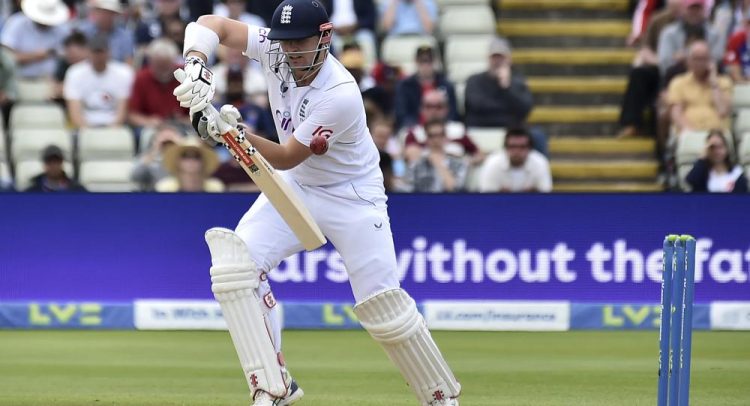 England sprints to 107-1 in chase against India

BIRMINGHAM, England (AP) — Alex Lees and Zak Crawley provided England a rollicking start to its run chase of 378 runs against India in the series-deciding test at Edgbaston on Monday.

The aggressive approach of new England team management, which began with a 3-0 sweep of New Zealand in a test series last month, was pretty much reflected in both openers’ brisk batting as the home team reached 107-1 at tea on day four in only 23 overs.

With plenty of time left in the test, England has got a perfect platform to not only square the series 2-2, but also surpass its previous successful run chase of 362-9 against Australia at Leeds in 2019.

England successfully chased down close to 300 runs in all three matches against the Kiwis. It needs 271 more runs with nine wickets and four sessions left.

Lees, who struggled against New Zealand and in the first innings at Edgbaston, decimated Indian fast bowler quartet with an unbeaten 56, laced with eight boundaries.

Jasprit Bumrah provided a late breakthrough when Crawley (46) didn’t offer a stroke to an incoming delivery which knocked back the stumps.

But Crawley and Lees were undeterred by Indian pace with their punchy drives on both sides of the wicket in a rapid century stand. Lees took early charge before Crawley settled in and played some exquisite drives much to the frustration of the visitors.

Earlier, India was bowled out for 245 for an overall lead of 377 half an hour after lunch as Ben Stokes quickly folded the tail and finished with 4-33.

England had hit back with four wickets in an intriguing first session before India stretched its lead to a 361 by reaching 229-7 by lunch.

England’s ploy to use the part-time off spin of Joe Root inside the first half hour didn’t work before it switched back to Broad.

Cheteshwar Pujara (68), who had completed his half century in the last over of the third day, started off well by hitting James Anderson for two boundaries in one over, but fell off Broad’s third ball.

Pujara had been patient throughout his over 3-1/2 hour knock, leaving dozens of balls outside the off stump before he cut hard at Broad and was caught at backward point.

Shreyas Iyer’s (19) inability to cope against the short deliveries yet again got exposed on English wickets when he played a tame pull shot against Matthew Potts (2-50) and was caught at mid-wicket.

First innings century-maker Rishabh Pant (57) completed his half century with a boundary off his pads to fine leg against Broad before Root plucked a fine catch as the left-hander attempted an extravagant reverse sweep against left-arm spinner Jack Leach.

Potts continued to threaten India’s tailenders with short balls and Shardul Thakur got struck on the helmet twice before he finally holed out at deep fine leg while attempting a hook shot against the tall fast bowler.

Stokes then folded India’s tail which put up a staunch resistance in the first innings. Mohammed Shami holed out off a short delivery; first innings century maker Ravindra Jadeja (23) played onto England skipper and Bumrah was caught in the deep after striking a six over fine leg.

England’s Alex Lees plays a shot during the fourth day of the fifth cricket test match between England and India at Edgbaston in Birmingham, England, Monday, July 4, 2022. (AP Photo/Rui Vieira)

Feds: R. Kelly remains on suicide watch ‘for his own safety’