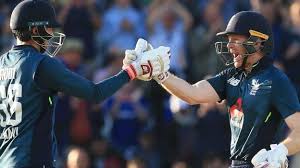 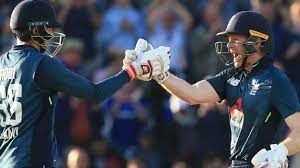 England served notice of their World Cup-winning credentials by crushing India in the third one-day international to take the series 2-1.

The home side eased to their target of 257 with 33 balls and eight wickets to spare – Joe Root hitting the winning runs to complete a second successive century and Eoin Morgan ending on 88 not out.

That India were restricted to a modest 256-8 was down to England’s excellence with the ball and in the field.

Shikhar Dhawan made 44 before being run out by Ben Stokes, while Virat Kohli looked ominous for 71 until he was bowled by a lovely Adil Rashid delivery.

With England’s limited-overs summer now at an end, the first of five Tests against India begins on Wednesday, 1 August.

Less than 12 months from hosting the World Cup, England have justified their tag as the world number ones by beating the side ranked second.

If the defeat in Scotland now looks like an aberration and the 5-0 whitewash of Australia lacks meaning because of the quality of the opposition, then this success is impressive because of the way England have had to adapt their game.

In the first ODI at Trent Bridge, England were destroyed by the left-arm wrist-spin of Kuldeep Yadav, but they controlled India in the second match at Lord’s and dominated in Leeds.

Indeed, just as Lord’s, it was England’s spinners who had more influence on the game at Headingley, while the patience of their batsmen against Kuldeep meant he went wicketless.

If conditions remain warm and dry, then England will have to negotiate plenty of spin during the Test series, which promises to be a fantastic contest.

Here, though, their superiority demoralised India, whose noisy fans were silenced in the evening sunshine.

Spain's new submarine 'too big for its dock'