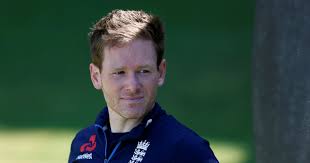 Eoin Morgan smashes ODI record 17 sixes to send England top of World Cup table.
Morgan – who was a doubt for the game after suffering a back spasm in England’s win over West Indies on Friday – surpassed the 16 maximums previously hit in an ODI innings by Chris Gayle, Rohit Sharma and AB de Villiers as he blasted a career-best 148 from 71 balls.

The left-hander reached his 13th ODI century – fittingly with a six – from 57 balls, with only Kevin O’Brien (50 balls), Glenn Maxwell (51) and De Villiers (52) having scored speedier World Cup tons.

Morgan’s plethora of sixes – eight of them hit off Rashid Khan, who went for 110 runs from his nine overs – helped England to a team sixes record of 25 and their highest World Cup total of 397-6.

Jonny Bairstow (90 off 99), Joe Root (88 off 82) and Moeen Ali (31no off nine) also fired for a batting line-up shorn of the injured Jason Roy (hamstring) – Ali cracking the six off that took England past their own world record of 24, set against West Indies in Grenada in February.

Afghanistan could not match England’s fireworks with the bat but showed plenty of fight, including Hashmatullah Shahidi (76), who braved a nasty blow on the helmet from Mark Wood (2-40) to top-score in his team’s total of 247-8 – the first time they have batted out their overs in the competition.

Jofra Archer (3-52) and Adil Rashid (3-66) were the most prolific bowlers for England, whose fourth win in five moved them above Australia at the summit on net run-rate and condemned bottom-placed Afghanistan to a fifth straight defeat.

The Morgan-inspired carnage ensured England racked up 233 from their final 20 overs but they found life hard going in the opening 10 as Afghanistan restricted them to 46 runs and dismissed James Vince (26) – Vince, into the side as Roy’s replacement, caught top-edging a pull.

Bairstow progressed to his 11th ODI fifty and slowest as an opener, from 61 balls, but motored after the milestone and was on course for his first World Cup hundred until he chipped a slower ball back to Gulbadin Naib (3-68) in the 30th over to end his stand with Root at 120.

Morgan may have been tempted to promote Jos Buttler after England’s fine start but the captain retained his No 4 spot and showed no sign of his back injury as he took apart the Afghanistan attack.

The skipper launched the seventh and eight balls he faced, bowled by opposition captain Gulbadin, for six and went on to wallop 15 more maximums as he took his tournament tally to 22, eight more than his nearest challenger, Australia captain Aaron Finch, who has 14.

Morgan would have been dismissed by Rashid for 28 had Dawlat not misjudged a catch in the deep – one of a host of fielding errors committed by Afghanistan – and the 32-year-old went on to wreck Rashid’s figures.

The spinner recorded the worst return by a bowler in World Cup history, with 58 of the runs he conceded coming from Morgan’s bat, and shipped a record 11 sixes in an ODI innings.

Ali, though, thumped four sixes and a four in the final two overs as the hosts beat their previous best World Cup score of 386-6, which was set against Bangladesh earlier in the tournament – Ali having been recalled by England for a mixture of tactical reasons and illness to seamer Liam Plunkett.

Afghanistan battled gamely with the bat, despite seeing Noor Ali Zadran (0) bowled by Archer in the second over, with Gulbadin hitting a brisk 37 from 28 deliveries and Rahmat Shah a steady 46 from 74.

Hashmatullah, who shared stands of 52 and 98 with Rahmat and Asghar Afghan (44) respectively, fell 24 runs short of a ton when he was cleaned up by a slower ball from Archer.

England were not faultless in the field – Bairstow spilling chances at slip and fine leg – but wicketkeeper Buttler did produce a fine running catch to remove Gulbadin after the batsman top-edged a short ball from Wood.