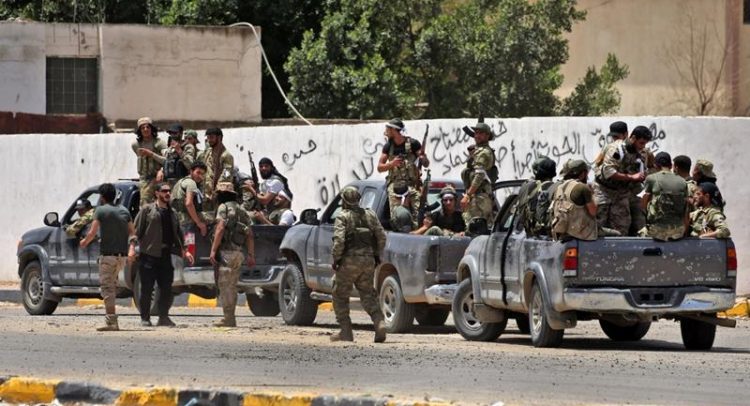 Erdogan: Haftar, his backers biggest obstacle to peace in Libya

Speaking at a joint news conference with GNA Prime Minister Fayez al-Sarraj in Ankara, Erdogan said on Thursday history would judge those who caused “bloodshed and tears” in Libya by supporting Haftar, whom he described as a “putschist”.

Erdogan also said a solution to the crisis in Libya can only be achieved politically and through efforts under the auspices of the United Nations.

Turkey and the GNA signed in November a military cooperation pact alongside a maritime demarcation deal, which gives Ankara oil exploration rights in the Mediterranean Sea that Greece and other countries reject.

The Turkish support has been crucial in the GNA’s efforts to push back Haftar’s self-styled Libyan National Army (LNA), which launched an offensive in April last year to seize Tripoli. On Thursday, after a string of recent military gains, the GNA said it had captured all areas surrounding the Tripoli city administrative area.

Ankara has sent equipment and military personnel to Tripoli following the signing of the agreements and has urged Haftar’s backers to end their support of his eastern-based forces. The LNA has been backed by the United Arab Emirates, Russia and Egypt.

For his part, al-Sarraj thanked Turkey for “its historic and brave stance” in Libya and said the GNA would continue its struggle until Haftar was eliminated.

The latest advance of the GNA around Tripoli is expected to hasten steps towards a potential truce.

On Monday, the UN said both sides had agreed to resume ceasefire talks, warning that weapons and fighters being flown into Libya in defiance of an embargo threatened a big new escalation.

Several peacemaking efforts in Libya have collapsed or been stalled since clashes began in 2014.

In a flurry of diplomacy, Serraj’s deputy was in Moscow and Haftar was in Egypt this week.

An increased presence in Libya would give Turkey strategic positioning near Egypt, with which ties are strained.

Tensions in Mediterranean
In the news conference, Erdogan also said Turkey and Libya would advance exploration and drilling for oil in the eastern Mediterranean Sea.

If this Ankara goes ahead with the move, Libya will also serve as another foothold for Turkey in the Mediterranean, where Turkey has been at odds with several neighbouring states.

Greece says Ankara’s maritime deal infringes on Crete’s continental shelf. Turkey – which has also been criticised by Israel and the European Union – says the deal abides by international law and rejects the notion islands can have such shelves.

Turkey previously said it could begin exploration and drilling in the eastern Mediterranean under the GNA deal within three or four months.

Photo: The Government of National Accord (GNA) military operations room said in a statement on Thursday its forces captured all areas surrounding the Tripoli city administrative area [Mahmud Turkia/AFP]