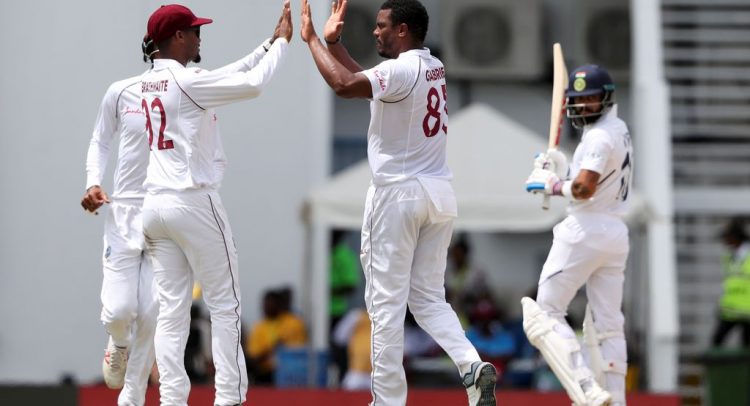 Estwick: West Indies will be big threat to England

BRIDGETOWN, Barbados – Assistant coach Roddy Estwick believes West Indies are better poised now than three years ago to carve out a positive series result on their proposed tour of England.

On their last tour of the United Kingdom in 2017, the Caribbean side pulled off an astonishing victory in the second Test at Leeds, but suffered heavy defeats in the two other Tests to go down 2-1 in the three-Test series.

However, Estwick said players had gained significant experience since then and with several other players coming through to give the Test squad greater depth, the Windies could prove a serious threat for their higher-ranked opponents.

“For me, I think we might be a better team when we go to England this time,” Estwick said while overseeing training sessions at Kensington Oval for the Barbadian group selected in the 30-man provisional squad.

“Three years ago in 2017, it was a very, very young unit. Now we’ve got seasoned Test players, we’ve got players with 50 Test matches so I think once we can hit the ground running and get the preparation in, get some match practice under our belts … we can be a lot better.”

West Indies beat England in the second Test at Leeds during the 2017 tour.

“We’ve got youngsters coming through. We’ve got Rahkeem Cornwall who could be a big threat in England especially if the weather stays the way it is. We’ve got Chemar Holder who just had an outstanding first class season and we’ve got Alzarri Joseph who’s improving all the time.

“So we’ve got backup for the first time in a long while – we’ve got Keemo Paul another exciting all-rounder so we’re quite solid bowling wise.”

He added: “If we can get scores on the board we can really challenge England because I know the bowling will be good, and the three big men (Jason Holder, Kemar Roach and Shannon Gabriel) are all in the top [20] in the world and that tells you our bowling unit is really improving.”

West Indies will travel with 25 players to the UK for the proposed three-Test series in July, which will mark cricket’s first ever tour played in a “bio-secure” environment due to the outbreak of the COVID-19 pandemic.

The squad is expected to depart the Caribbean on June 8 and will be placed in a two-week quarantine following their arrival in England, before moving to “bio-secure” stadia for the duration of the series where they will be isolated from the public.

Replacement players will be chosen from among the travelling contingent, which will also form the opposition for any tour matches.

“You can understand why they’ve done it because once you’re in a secure system you can’t leave so if players get injured, you can’t come into the secure area. [So] we had to do it that way,” Estwick explained.

Estwick said intense planning for the tour was already underway and noted he had been in “constant contact” with head coach Phil Simmons who is currently based in the UK.

“He’s been having Zoom meetings with all the management team. He’s trying to keep everybody upbeat – that’s the first thing he’s trying to do,” he said.

“We’ve sorted that out now; it’s up to people to go and prepare, prepare properly, adhere to the protocols that are in place and try and stay as safe as possible.”

West Indies are holders of the coveted Wisden Trophy after upsetting England 2-1 in a three-Test series in the Caribbean last year.

'Lemon' or not, Trump is stuck with Phase 1 China trade deal

Over $300M in ganja destroyed by Police in Berbice this year