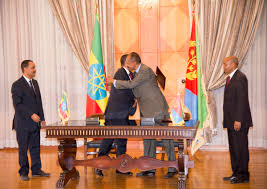 The leaders of Ethiopia and Eritrea have signed a declaration saying that the state of war between the two countries is over.

A peace deal ending the 1998-1999 border conflict has never been fully implemented and there has been tension between the neighbours ever since.

The countries have also agreed to re-establish trade and diplomatic ties.

The declaration came at a landmark meeting between the two countries’ leaders in Eritrea’s capital, Asmara.

On Monday, the leaders agreed that “a new era of peace & friendship has been ushered [in]”, Eritrea’s Information Minister Yemane Gebre Meskel said on Twitter.

Mr Abiy’s chief of staff, Fitsum Arega, tweeted that the two countries “are determined to close a costly chapter”.

A peace deal ending the border war, in which more than 70,000 people died, was signed in December 2000. However, Ethiopia refused to accept the final ruling of a border commission two years later, which awarded disputed territory to Eritrea, including the town of Badme.

A “no war, no peace” situation had existed between the two countries since then.

Monday’s declaration, which follows a visit to the Ethiopian capital, Addis Ababa, by Eritrean diplomats, comes after Mr Abiy said his country would accept the commission’s ruling.

This diplomatic initiative is the latest in a series of changes introduced by the Ethiopian prime minister since he came into office in April. Before then, it was unthinkable for Ethiopia to accept that Badme, the flashpoint for the conflict, was part of Eritrea.

Beryl dumps its rainfall on St. Kitts and Nevis