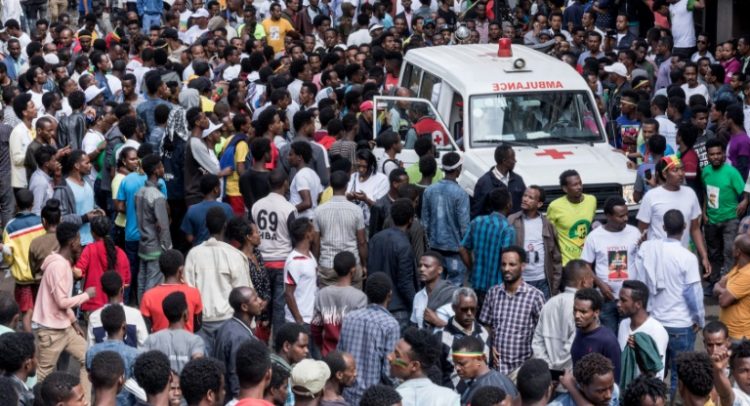 The death toll from a grenade attack on a pro-government rally in Ethiopia’s capital climbed to two on Sunday, a cabinet minister said, as state media reported 30 arrests over the blast including several police officers.

The attack occurred in a packed public square in Addis Ababa as new Prime Minister Abiy Ahmed was wrapping up a speech before tens of thousands of people.

“I’m so sorry to learn that we have lost another Ethiopian victim of yesterday’s attack,” Health Minister Amir Aman tweeted.

Initially, one person was reported to have died, but Abiy himself emerged safe and sound.

The chaos that erupted after the blast as panicked crowds moved towards the stage injured more than 150 people and marred an event meant to build public support for Abiy’s ambitious reform agenda.

Ethiopian Broadcasting Corporation reported 30 people have been arrested on suspicion of involvement in the blast, along with a number of police officers.

Event organiser Seyoum Teshome on Saturday told AFP that police grappled with someone attempting to hurl a grenade at the prime minister as he concluded his speech.

Abiy visited hospitals on Saturday where victims of the attack were being treated, his chief of staff said on Twitter.

And on Sunday one of Addis Ababa’s largest football teams organised a blood drive for the injured.

No group has publicly claimed responsibility for the attack, a rare instance of violence in the heavily policed capital.

Grenade attacks were reported last year in the northern city of Gondar, but it was unclear if those incidents were connected to Saturday’s blast.

Abiy took office in April after years of anti-government unrest that pushed his predecessor to resign and the government to declare a nationwide state of emergency.

He has since announced plans to liberalise the economy and reconcile with neighbouring arch-enemy Eritrea.

Abiy also lifted the state of emergency and released scores of jailed dissidents.

Ethiopia is completely controlled by the secretive Ethiopia People’s Revolutionary Democratic Front (EPRDF), and it is unclear how much support Abiy has within the party.

The 42-year-old former government minister and army officer is the first prime minister in modern Ethiopia from the country’s largest ethnicity the Oromo, which spearheaded the anti-government protests.

After the prime minister’s hasty departure following the blast, people swarmed the stage where he had spoken and chanted “down down Woyane,” an anti-government slogan aimed at the Tigrayan ethnic minority many Ethiopians believe dominates the EPRDF.

Jamaica will not be left behind in medical cannabis market, says Shaw