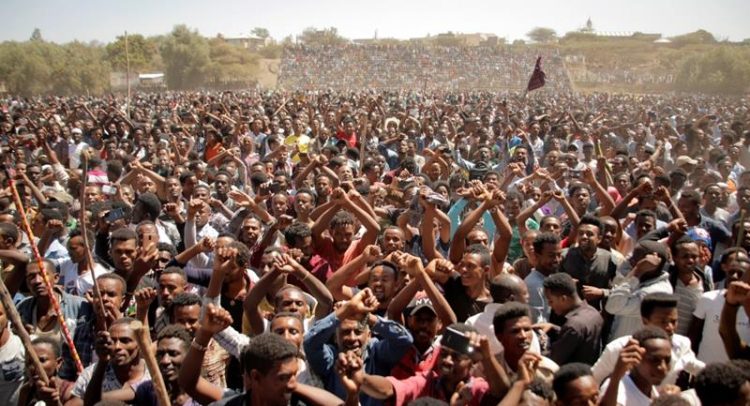 Ethiopia ‘at crossroads’ after Hailemariam resignation 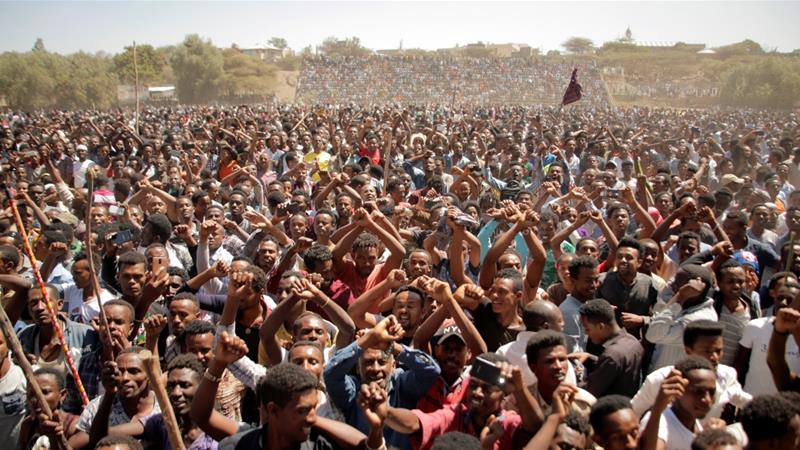 Some describe it as a “transformational moment”; others the result of an “unprecedented” wave of protests.

But whatever it is labelled, Ethiopian Prime Minister Hailemariam Desalegn’s surprise resignation is setting the stage for a crucial succession race, that is likely to shape the future course of a country rocked by violent unrest and political instability.

Hailemariam, who has sat at the helm of the Ethiopian government since 2012, announced on Thursday he would be stepping down as prime minister and head of the ruling coalition.

He cited ongoing “unrest and a political crisis” in the country as major factors in his resignation, which he described as “vital in the bid to carry out reforms that would lead to sustainable peace and democracy”.

Awol Allo, a lecturer at Keele University’s School of Law and an expert on Ethiopia, said the announcement was not entirely unexpected, as rumours that Hailemariam would step down after the ruling party congress next month were widespread.

“But [the resignation] came sooner than most had expected,” Allo told Al Jazeera.

Figures within the ruling Ethiopian People’s Revolutionary Democratic Front (EPRDF) have been at odds, he explained, and mass protests in the country’s restive Oromia region and elsewhere, calling for greater freedoms, have increased pressure on Hailemariam’s government.

The TPLF is perceived to be the most dominant group within the ruling coalition, even though Tigrayans make up only six percent of the country’s population. Members of the group also hold influential positions in the security forces and other sectors.

By contrast, the Oromo and Amhara people, who have long-standing grievances against the government and say they are politically, economically and socially marginalised, make up over 61 percent of the population.

Widespread protests broke out in the populous Oromia region, home to the Oromo, in 2015, after plans for a contentious development project in the capital, Addis Ababa, were unveiled.

But the demonstrations quickly spread to other parts of the country, including, most notably, the Amhara region, with protesters demanding wider political freedom and equality, as well as an end to human rights abuses.

Hundreds of people were killed and thousands were arrested in a government crackdown that prompted condemnation from human rights groups.

Ethiopia also imposed a state of emergency, which was lifted after 10 months.

Still under pressure, the Ethiopian government announced plans last month to shutter an infamous prison in Addis Ababa and release thousands of prisoners, including journalists, political leaders and opposition figures.

The government has released more than 6,000 prisoners so far.

But this week, widespread youth-led protests broke out once more in Oromia and a three-day strike was declared, amid rising tension over what many viewed as the slow release of the prisoners.

The effect of these protests is “unprecedented” in the country’s history, according to Allo.

“This is the same protest movement that forced this government to declare a state of emergency, forced it to release political prisoners, [and now] forced the prime minister to resign,” he said.

“This protest [is what] brought about this radical change.”

Jawar Mohammed, a US-based Oromo activist and executive director of the Oromia Media Network, agreed that Hailemariam’s exit was a product of the demonstrations.

The resignation also reflects the government’s inability “to control or respond appropriately” to the protesters’ demands, which include reforms to the democratic sphere and greater equality, he told Al Jazeera.

Befekadu Hailu, an Ethiopian writer and activist, echoed those sentiments, explaining that the state’s earlier tactics – including the violent crackdown and the promise to release all political prisoners – did not work in stemming the unrest.

“I think the pressure from the popular movements and also the reformist members of the ruling coalition forced the resignation to come early,” Befekadu said.

But, according to Mohammed, whoever is appointed the next prime minister must “be a reformist with strong support to implement reforms.

“The issue right now is timing,” he said. “How fast can they reform? … The options right now are speedy reform, or a revolution where the regime will be completely swept away.”

The EPRDF accepted Hailemariam’s resignation Thursday morning, and the coalition’s council of ministers is expected to convene on Friday to name his successor, according to local media reports.

Asafa Jalata, a professor of African Studies at the University of Tennesse-Knoxville whose research focuses on the Oromo, said many people in Oromia hope Lema Megersa, president of the regional government, may take on the duties of prime minister.

That could help ease ongoing political tensions in the short-term, until Ethiopians cast their votes in general elections, which are scheduled for 2020, he said.

Others have suggested that Ethiopian Foreign Minister Workneh Gebeyehu and Deputy Prime Minister Demeke Mekonnen could also be considered for the position.

“Ethiopia is at a crossroads,” Jalata told Al Jazeera.

“One would wish that learning from the past crisis, different stakeholders, including the government, would facilitate a transformation to democracy.”

“If they choose a candidate from either of the two main groups who have been protesting for most of the past three years, the Oromo and the Amhara, then it will be interesting to see how they are going to appease the other group that they leave out of this coalition,” Al Jazeera’s Mohamed Adow, reporting from Doha, said.

For his part, Befekadu said that, while it is difficult to predict what will come next, he feared the most dominant group within Ethiopia’s ruling coalition, the TPLF, may take drastic measures to maintain its grip on power, including a potential coup.

“That is my worst fear,” Befekadu said, adding that he has not given up hope, however.

“I hope there will come a person who will decide to reconcile the radicalised division in Ethiopia. That’s my hope.”