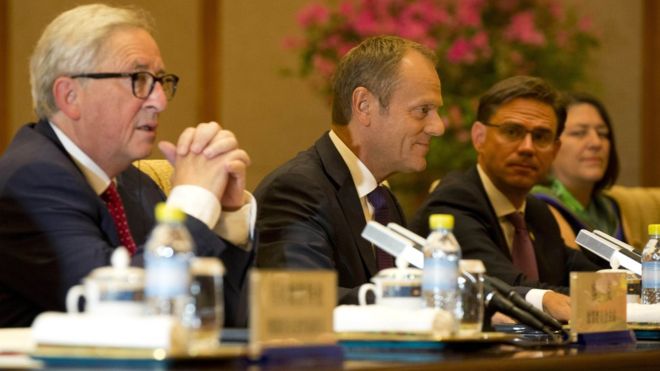 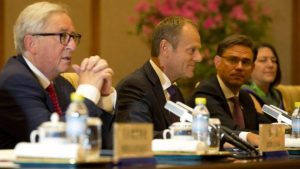 China should make its economy more open to foreign firms, European Commission President Jean-Claude Juncker has said while on a visit to Beijing.

Mr Juncker was accompanied by the President of the European Council, Donald Tusk, who warned that worsening trade tensions could lead to conflict.

They were met by Chinese Premier Li Keqiang, who stressed the need to uphold free trade.

Meanwhile, China has filed an official complaint against new US trade tariffs.

Last week, the US listed $200bn (£150bn) worth of additional products that it intends to penalise as soon as September.

The US move is the latest salvo in a growing trade war started by the imposition of US tariffs on steel and aluminium imports.

Mr Juncker said that China, often criticised for protectionist attitudes towards foreign companies, could help matters by being more open.

Speaking at a news conference, he said: “If China wishes to open up, it can do so. It knows how to open up.”

Mr Tusk urged the US, China and Russia to work with the EU to ease global trade tensions, saying that the international order needed responsible reform.

“There is still time to prevent conflict and chaos,” he added.

The two senior European politicians came to Beijing for an EU-China summit, which produced a communique committing both sides to the multilateral global trading system.

China’s Mr Li asked foreign companies to tell him if they had suffered any theft of intellectual property, one of the US’s complaints against China’s trading methods.