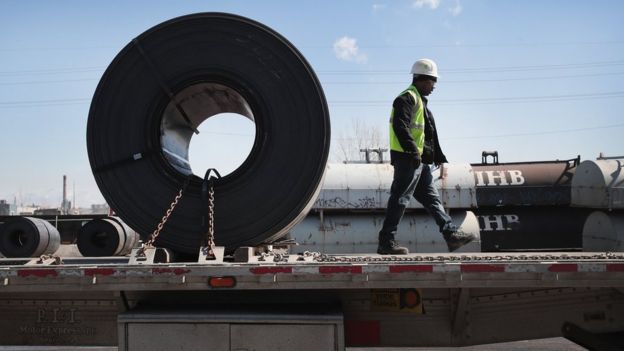 EU has ‘gun held to head’ on steel tariffs 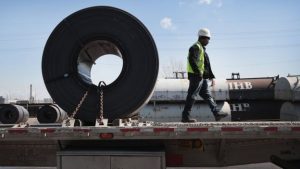 EU leaders have a “gun held to their head” over the threat of US tariffs on steel imports, the head of trade body UK Steel has warned.

Gareth Stace said the EU needed to impose safeguards to curb Chinese steel once destined for the US that will now be heading to Europe.

The EU has already said it will respond by imposing tariffs on US products such as motorcycles and jeans.

The 25% US tariffs are due to come into effect on Friday morning UK time.

Steel producers across the EU were granted a temporary exemption from the tariffs while the US tried to persuade the EU to cut steel production or make other concessions.

However, reports have suggested that last-minute talks in Paris had failed, with Wilbur Ross, the US Commerce Secretary, indicating that he was poised to impose the tariffs.

“It’s entirely up to US authorities whether they want to enter into a trade conflict with their biggest partner, Europe,” he said after meeting Mr Ross in Paris.

The EU would take “all necessary measures” to respond if the US did impose tariffs, Mr Le Maire warned.

Mr Stace said US tariffs would be “purely protectionist”.

“What President Trump is proposing to do here is not free trade and it’s against WTO rules,” he told BBC Radio 4’s Today programme.

“Since he announced that he was going to impose these blanket, arbitrary tariffs on steel imports almost three months ago we have hoped for the best but we’ve feared for the worst – and that’s what we might see at midnight tonight, US time.”

‘Over-capacity’
Mr Stace admitted that there was a problem of global over-capacity in the steel industry, but said most of that was in China.

About 20 million tonnes of Chinese steel would need to “find a new home to go to and, because we are a free and open market here in the UK/the EU, it’ll come here, we believe, and therefore further damage our sector – not only from the direct impact of tariffs in the US but the surge of steel coming here”, he said.

EU leaders have said they will not negotiate with the US on trade while the tariff issue is unresolved or, as France’s President Macron has put it, while they have a gun pointing at their head.

“Ultimately they do have a gun held to their head – they’re being … pushed into a corner,” said Mr Stace.

“What we might see is damage not only to the UK economy but to the US economy if we don’t get a further extension … or indeed President Trump actually sees sense and understands that there will be no winners here.”

European trade commissioner, Cecilia Malmström, said she doubted that Europe could avoid some kind of restriction, whether they be tariffs or export limits.

During a discussion panel at an Organisation for Economic Co-operation and Development in Paris on Wednesday, Mr Ross said negotiations could continue, even with tariffs in place.

If the tariffs go into effect, the US would levy a 25% tax on European steel and 10% tax on the bloc’s aluminium.