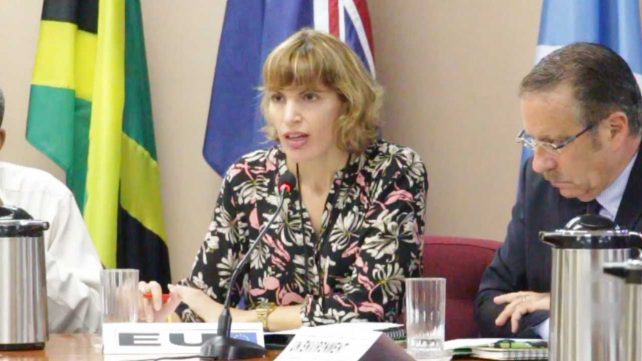 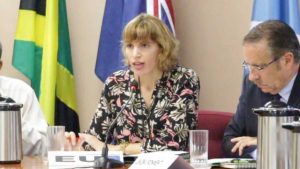 The European Union (EU) on Thursday 14 June reaffirmed its financial support for regional sustainable development and noted that it desired as one of the outcomes, a concise Regional Biodiversity Strategy for the next 5 years.

“The European Union as you all know has been a reliable friend to CARICOM/CARIFORUM and it is our hope that the exchanges throughout this workshop will guide the discussion towards a concise Regional Biodiversity Strategy for the next 5 years.”

Describing the EU as “the world’s largest contributor” to cooperation for development and climate financing, she said it increasingly integrates climate change into its broader development strategy.

Much work she noted has been done with the UN Environment “to build a strong regional approach to the conservation and management of marine and terrestrial biodiversity in the Caribbean, focusing initially on Cuba, Haiti and Dominican Republic (with a budget of 3.5 m EUR).”

With an additional budget of 40m EUR, she said the EU will also be providing support to 12 of its ‘overseas territories’ through a regional programme focusing on Resilience, Sustainable Energy and Marine Biodiversity.

Tackling Climate Change is a “burning priority” of the EU for which it is using 20% of the funds from the contributors by 2020 for projects and programs related to Climate Change or Disaster Risk Reduction, the Chargé d’Affaires a.i stated.

She said those financing priorities are with the knowledge that the Caribbean Sea region is particularly sensitive to natural and climate related disasters.

“Each year hurricanes are a risk for many of the islands, and they are expected to become more intense in the future because of climate change. Various Caribbean countries are fringed by mangroves, sea grass meadows and coral reefs, all of which form an interrelated ecosystem that is not only important to the economic and social well-being of the islands and countries, but they are key elements for adapting to the countries’ increasing vulnerability to these more intense natural events associated with climate change.”

For example, she added,

“The mangroves, sea grass meadows and coral reefs not only provide well-documented protection against strong waves and storm surges during tropical storms and potable groundwater supplies, but they provide food, shelter, habitat, important nursery grounds and reproductive areas for many species. Mangroves and sea grasses also capture significant volumes of CO2 released into the atmosphere from burning fossil fuels.”

Underscoring the critical importance of proper management of biodiversity, she noted, “Most tourists appreciate the beauty of landscapes and seascapes like healthy coral reefs, beautiful beaches and other ecosystems that provide a broad range of essential services that would be either expensive, or impossible to restore or replace once they are lost.”

Therefore, she added, “investing in protecting and building the resilience of nature´s free services on the land and in the sea is a necessity for the well-being of the islands’ and countries’ future generations.”