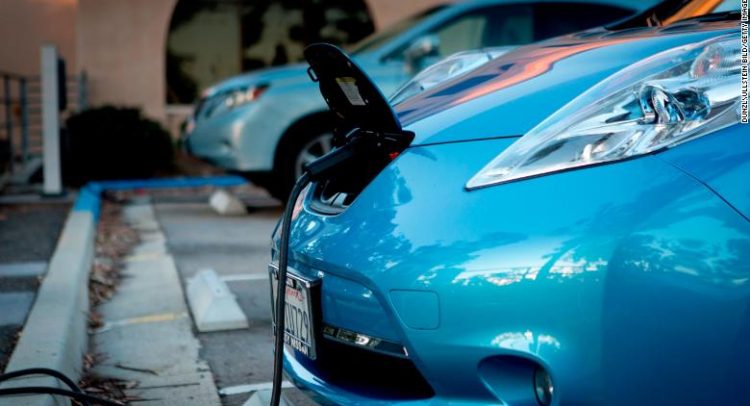 London (CNN Business)Electric vehicles have been hailed as part of the answer to the climate crisis, but for some people they represent a new danger.

Pedestrians can struggle to hear quiet electric and hybrid vehicles coming, which presents a particular risk for blind and visually impaired people.
But as of Monday, all new models of electric and hybrid vehicles developed and sold in the European Union must come equipped with an acoustic sound system.
Vehicles will have to produce a sound when reversing, or driving below 12 miles per hour, according to the UK government.
The sound, produced by an acoustic vehicle alert system (AVAS), will be similar to that of a standard internal combustion engine, and drivers will be able to temporarily disable it if they want.

The measure was passed by the European Parliament in 2014, according to a press release from the European Commission, and a five-year transitional period has now ended.
From July 2021, the regulation will be to all new electric and hybrid vehicles registered in the bloc.
“The government wants the benefits of green transport to be felt by everyone, and understands the concerns of the visually impaired about the possible hazards posed by quiet electric vehicles,” Michael Ellis, the UK’s roads minister, said in a statement. “This new requirement will give pedestrians added confidence when crossing the road.”

The UK’s Royal National Institute of Blind People praised the development.
“After years of campaigning on this issue, we welcome the new regulations,” the RNIB tweeted.
And the charity Guide Dogs welcomed the news as a positive step in reducing the risk posed to vulnerable road users by electric and hybrid vehicles, while calling on the UK government to take further action.

“We’re calling on the government to take this announcement further by requiring AVAS on all existing electric and hybrid vehicles and to ensure drivers have them switched on,” John Welsman, guide dog owner and Guide Dogs staff member, said in a statement.
Some manufacturers, including Toyot (TM)and Jaguar, have already developed AVAS systems for their electric vehicles, while BMW has enlisted top film score composer Hans Zimmer to make driving sounds for the electric BMW Vision M Next concept car.

The sounds, recorded with Renzo Vitale, acoustic engineer and sound designer at the BMW Group, may be used in the German automaker’s next generation of electric vehicles.
You can listen to the spaceship-like sound effects on the BMW website.

Electric vehicles are an important part of a drive to cut air pollution by reducing the number of gasoline and diesel cars on the roads.
Britain and France will ban sales of new gasoline and diesel cars starting in 2040; India is aiming to make every vehicle sold run on electricity by 2030; and Norway has said all new passenger cars and vans sold in 2025 should be zero-emission vehicles. China, the world’s largest car market, is working on a plan to ban the production and sale of vehicles powered only by fossil fuels.
By 2040, electric cars could make up 57% of all passenger car sales worldwide, according to an analysis by Bloomberg New Energy Finance.