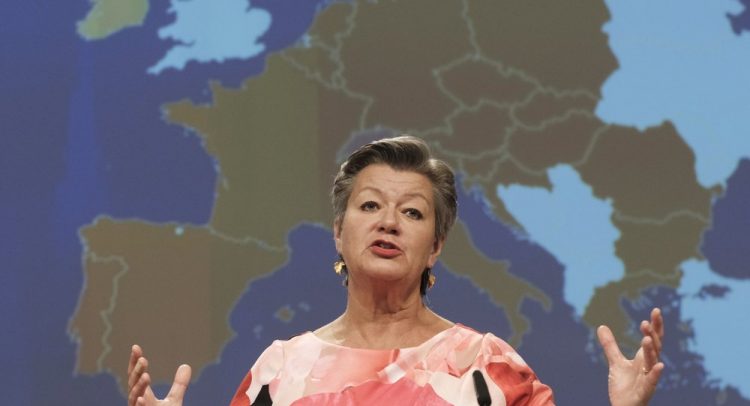 BRUSSELS (AP) — The European Union on Thursday urged all its member countries to start lifting travel restrictions on their common borders from next week, saying that the closures they introduced to tackle the coronavirus do little to limit its spread.

The EU’s executive arm, the European Commission, wants Europe’s ID check-free travel area to be up and running again by the end of June. Once that has happened, a ban on nonessential travel to the continent can also gradually be eased.

Unveiling the executive arm’s recommendations for helping to breathe new life into Europe’s virus-ravaged tourism sector, EU Home Affairs Commissioner Ylva Johansson told member countries that they “should open up as soon as possible, and the commission recommends to do it already on Monday.”

Johansson said that the virus situation “is really improving in all member states, the situation is converging,” and she said that Europe’s Centre for Disease Prevention and Control has reported “that having internal border restrictions is not an effective measure.”

In a report dated May 26, the ECDC said that “the relative significance of transmission through tourism and long-distance travel will probably be small compared to ongoing transmission occurring in the local setting and as a result of local transportation.”

Panicked by Italy’s coronavirus outbreak in February, countries in the 26-nation Schengen travel zone — where people and goods move freely without border checks — imposed border restrictions without consulting their neighbors to try to keep the disease out, causing massive traffic jams and blocking medical equipment.

Free movement is a jewel in Europe’s crown that helps its businesses flourish and many European officials worry that the future of the Schengen area is under threat from coronavirus travel restrictions. These added to border pressures already caused by the arrival in Europe of well over 1 million migrants in 2015.

Many EU countries have announced that they are indeed easing internal border restrictions from June 15, but some remain reluctant to do so, fearful that the disease might not be entirely under control in certain of their neighbors.

Johansson said the Schengen area has to function again before Europe’s borders to the outside world can open, and the commission is keen for countries to start easing the ban on travel into the continent by July 1.

Foreign students, non-EU nationals who normally live in Europe and certain highly skilled workers could be exempt from the coronavirus restrictions from then on.

After the coronavirus began spreading throughout Europe, the EU in March gradually extended a ban on all non-essential travel into the 27 member countries plus Iceland, Liechtenstein, Norway and Switzerland until June 15. Ending the restrictions could bring another economic boost.

“While we will all have to remain careful, the time has come to make concrete preparations for lifting restrictions with countries whose health situation is similar to the EU’s and for resuming visa operations,” Johansson said.

The spread of the coronavirus is easing in Europe, but it remains high elsewhere and other countries still have bans in place on the entry of some European nationals, so the commission is reluctant to lift all travel restrictions.

It is urging European countries to take coordinated decisions on whom they let in and from where — given that visas for the passport free Schengen area allow travel in 26 countries — and base their actions on data from the World Health Organization and the ECDC.

The plan is for the member nations to draw up a list of acceptable countries in coming weeks and add to it, or take countries off, depending on how they handle the spread of the disease.

Johansson refused to be drawn on who should be allowed back in, notably not commenting on U.S. nationals. But she said that Europe’s neighbors from the Balkans region — Albania, Bosnia, Kosovo, Montenegro, North Macedonia and Serbia — should be on the list from July 1.

Photo: European Commissioner for Home Affairs Ylva Johansson addresses a video press conference at EU headquarters in Brussels, Thursday, June 11, 2020. The EU on Thursday announced plans to ease a ban on non-essential travel to the continent with foreign students, non-EU nationals who normally live in Europe and certain highly skilled workers likely to be exempt from the coronavirus restrictions from July 1. (Olivier Hoslet, Pool Photo via AP)