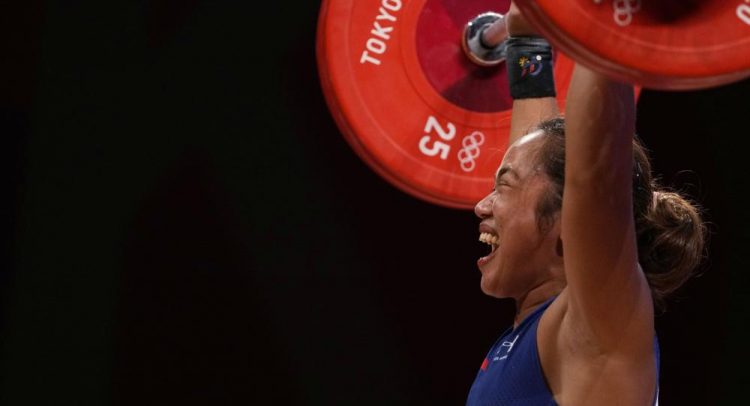 MANILA, Philippines (AP) — The rewards, the citations and the nationwide parties are going to have to wait, for a week or so anyway.

Philippine weightlifter Hidilyn Diaz, fresh from winning her country’s first Olympic gold medal in nearly a century at the Tokyo Games, arrived in Manila on Wednesday and was whisked off to a hotel for seven days of quarantine.

“Gold at last!” read a banner at the airport as military personnel waved Philippine flags and applauded when Diaz landed. But not even her historic medal can eclipse coronavirus protocols in a country grappling with continuing virus outbreaks and an economic crisis.

The 30-year-old Diaz, who won gold in the women’s 55-kilogram category on Monday in her fourth Olympic appearance, will be able to collect her rewards once she is released from quarantine.

Philippine officials and business tycoons have offered more than 40 million pesos ($800,000) in cash. Others have pledged a residential condominium unit in an upscale district, a vacation house in a resort city south of Manila, a new van and free gasoline, as well as free commercial flights for life.

The Philippines has the second-largest number of COVID-19 infections and deaths in Southeast Asia. Lockdowns and quarantines caused the economy to plummet last year in the country’s worst post-war recession.

The Philippines has competed at every edition of the Summer Olympics since 1924 — except for a boycott of the 1980 Moscow Games — and has won three silver and seven bronze medals. Diaz won a silver medal in 2016, her country’s first appearance on an Olympic podium in 20 years.

Ahead of the pandemic-delayed Tokyo Games, travel restrictions forced Diaz to undergo training for more than a year in Malaysia. But with her triumph, Diaz earned a place in the country’s “pantheon of legendary athletes,” according to a Philippine Senate citation. She joins the ranks of a handful of Filipino sports celebrities who have earned international acclaim, led by boxer Manny Pacquiao, now a senator and a possible presidential contender in next year’s elections.

Philippine TV networks have run tributes on Diaz, focusing on how she overcame poverty in her southern hometown of Zamboanga through sports. The fifth of six children of a motorcycle taxi driver, she had to carry containers of water for blocks to her house and haul vegetables to be sold in a public market, helping develop her muscles.

People saw her potential for weightlifting early but she was discouraged by others who told her the sport was reserved for men and that they could prevent her from getting pregnant.

But she persisted and won a local weightlifting competition, which served as her springboard to the Olympics.

Military chief of staff Gen. Cirilito Sobejana said Wednesday that Diaz, who is in the air force, has been promoted to the rank of staff sergeant “for bringing pride and glory to our country.”

Duterte, Roman Catholic church leaders, top business executives, movie celebrities and ordinary Filipinos have expressed gratitude and congratulations. Aside from well wishes, a windfall of financial rewards await. Philippine officials and business tycoons have pledged more than 40 million pesos ($800,000) in cash. Others have pledged a residential condominium unit in an upscale district, a vacation house in a resort city south of Manila, a new van and free gasoline, as well as free commercial flights for life.

Hidilyn Diaz of Philippines celebrates as she competes and sets new world record and won the gold medal in the women’s 55kg weightlifting event, at the 2020 Summer Olympics, Monday, July 26, 2021, in Tokyo, Japan. (AP Photo/Luca Bruno)

Countries of the Americas give resounding display of unity