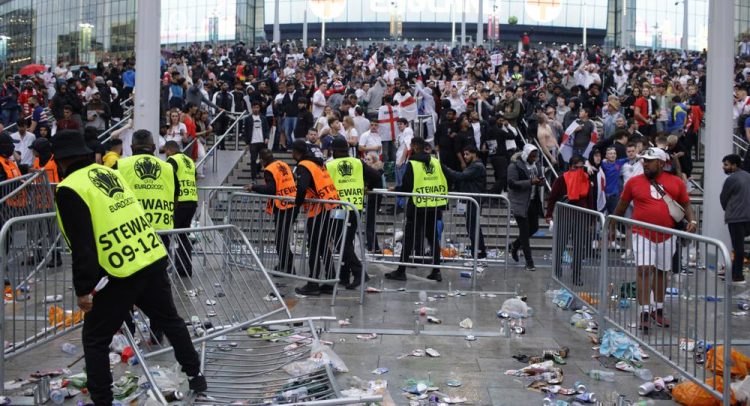 LONDON (AP) — Aggression by England fans at the European Championship final exposed an “embarrassing” part of the national culture that endangered lives and should lead to fans being barred from stadiums if they are chanting abuse and under the influence of drugs or alcohol, an investigation into the disorder has concluded.

The review found that around 2,000 ticketless supporters stormed into Wembley on July 11 after 17 “mass breaches” of the stadium gates, with many forcing their way through disabled access entrances by punching and kicking stewards before England lost to Italy in the country’s first men’s final since winning the 1966 World Cup.

“The behavior of a large minority of England supporters was not just disgraceful, it recklessly endangered lives,” Louise Casey, an experienced former government official, said in a 129-page report published Friday.

“The appalling behavior of supporters on Euro Sunday should be a wake-up call for us all. For too long, the actions of a minority of England fans have been tolerated as a part of our national culture (albeit an embarrassing one), rather than confronted head-on.”

The review said had England won the game, a ticketless group of 6,000 people were thought to be preparing to storm the stadium to see the trophy presented.

Casey blamed the ability for the rampage to take place on a “collective failure” and said she did not want to “scapegoat” anyone.

“A minority of England supporters turned what should have been a day of national pride into a day of shame,” Casey said.

Casey recommended that the English Football Association leads a campaign to bring about a “sea-change in attitudes” by fans.

Some 100,000 fans gathered around the north London stadium for the match despite pandemic curbs capping the 90,000-seat Wembley’s capacity at 67,000.

“The threats, aggression, violence, smoke and flare use, throwing of missiles — including faeces — excessive consumption of alcohol and cocaine all combined to fuel a febrile atmosphere,” Casey said. “A loss of experienced stewards as a result of the pandemic left Wembley’s stewarding operation vulnerable when confronted with the most aggressive and disorderly crowd Wembley had ever seen.”

“In one appalling incident,” she said, “a ticketless fan tried to impersonate a steward and hijack a disabled child and separated him from his father, in order to trick his way through a pass gate.”

The insufficient enforcement of the ban on drinking alcohol on public transport in London was highlighted in the report.

“The FA and Wembley, working with others, should step up action on eradicating such behaviors from football … refusing to allow entry to fans who arrive chanting foul abuse and/ or are clearly under the influence of alcohol and/or drugs,” she said.

“The existing enforcement mechanisms available to the police and other enforcement officers do not offer enough deterrent against those determined to use the cover of football matches to commit criminal offenses,” she said.

Players’ families were caught up in the unrest, with England defender Harry Maguire’s father injuring ribs.

UEFA has already punished England, with a home Nations League game in June having to be played in an empty stadium. A second empty-stadium game was deferred for a two-year probationary period.

“The review makes clear that the circumstances leading up to the match led to a perfect storm of lawlessness,” FA chief executive Mark Bullingham said in a statement. “No event is set up to deal with such disgraceful behaviour from thousands of ticketless fans. Collectively we must never allow this to happen again.”

FILE – Stewards replace barricades after they were knocked over by supporters outside Wembley Stadium in London, during the Euro 2020 soccer championship final match between England and Italy, on July 11, 2021. An investigation into the disorder at the European Championship final says aggression by England fans exposed an “embarrassing” part of the national culture that endangered lives and should lead to entry to stadiums being prohibited to anyone chanting abuse and high on drugs or drunk. (AP Photo/David Cliff, File)