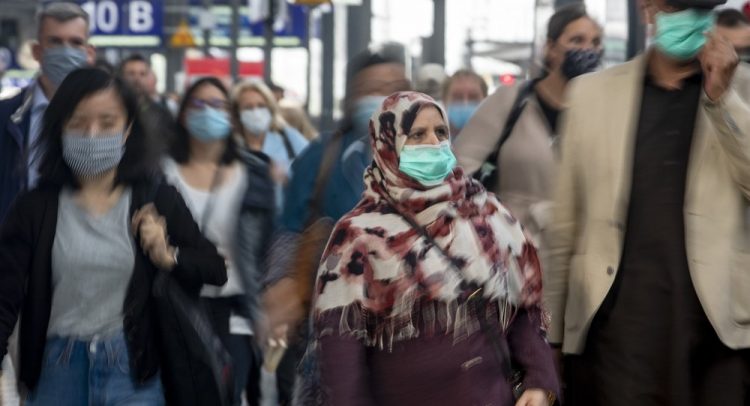 ATHENS, Greece (AP) — Europe grappled Thursday with local spikes in coronavirus infections as the continent’s lockdown restrictions eased, after hundreds of cases were found at one meatpacking plant in Germany and Greece had to impose a total seven-day lockdown on one village.

The developments came even as a new outbreak in Beijing saw a decline in daily cases and Hong Kong Disneyland reopened after a major drop in infections in the Chinese territory.

In western Germany, health officials in Guetersloh on Wednesday said the number of new COVID-19 cases linked to the Toennies slaughterhouse in Rheda-Wiedenbrueck had risen to 657, a significant regional spike for a country that has recorded daily nationwide infections in the low hundreds lately.

“It’s no coincidence that the Toennies slaughterhouse has become the next hotspot of Coronavirus infections,” said Freddy Adjan, the deputy chairman of the NGG union that represents workers in the food and drinks industry.

Germany is widely considered to have handled the pandemic well. The infection rate declined sharply after authorities imposed nationwide social distancing rules in March and the daily case increase has averaged between 300-400 in June. Germany has recorded 188,474 confirmed COVID-19 cases and 8,844 deaths — about one-fifth of Britain’s death toll.

Greek authorities on Thursday imposed a full lockdown on Echinos, which has a population of around 3,000, in the northeastern province of Xanthi, after a spike in cases and deaths, while the small Balkan nation of Monetenegro reported new infections after weeks of having no positive cases..

All residents of Echinos were under curfew, allowed to leave their homes only to buy food or medication and only while wearing masks, after 73 new coronavirus cases and four deaths were registered in the last week.

Greece has been widely praised for managing to contain its outbreak, with only 187 virus-related deaths and just over 3,200 confirmed cases.

In neighboring Turkey, authorities made wearing masks mandatory in three major cities, including the financial hub of Istanbul and the capital of Ankara, following an increase in confirmed cases since many businesses were allowed to reopen.

In China, an outbreak detected in a wholesale market in the capital last week has infected at least 158 people in the country’s largest resurgence since the initial outbreak was brought under control in March. The city reported 21 new cases of COVID-19 on Thursday, down from 31 on Wednesday. City officials said close contacts of market workers, visitors and other connections were being traced to locate all further cases as quickly as possible.

The United States, meanwhile, has been increasing pressure on China’s leaders to reveal what they know about the pandemic. U.S. Secretary of State Mike Pompeo “stressed the need for full transparency and information sharing to combat the ongoing COVID-19 pandemic and prevent future outbreaks,” the U.S. State Department said about his meeting with the Communist Party’s top diplomat, Yang Jiechi.

Pompeo has joined President Donald Trump in criticizing China’s response to the outbreak, including claiming that the virus may have emerged from a Chinese laboratory in Wuhan.

China is also being called on to relieve the virus’ financial consequences in Africa.

African nations are holding a high-level conference next week on coronavirus vaccines to “position ourselves to not be left behind” in access to the drugs, John Nkengasong, head of the Africa Centers for Disease Control and Prevention, said Thursday.

He said the WHO chief would attend the talks that would also focus on “how we can manufacture a vaccine ourselves,” noting that several countries, including Senegal, Egypt and South Africa, already have vaccine manufacturing capabilities.

Africa’s 54 nations have been deeply concerned about getting access to testing and medical supplies amid intense global competition. The continent has about 260,000 cases, with South Africa accounting for about 30% of them.

The virus has infected more than 8.3 million people since it emerged in the Chinese city of Wuhan late last year and killed nearly 450,000, according to a Johns Hopkins tally of official data. Both numbers are believed to deeply undercount the true toll due to limited testing and other factors.

The United States has the most infections and deaths by far, with 2.1 million infected and more than 117,000 dead. Americans have wrestled with deep emotional divides between those who support lockdowns and restrictions like wearing masks to stop the spread of the virus and those who believe such measures infringe on personal freedoms.

Other countries are also confronting politicized debates amid growing infections.

India recorded its highest one-day increase of 12,281 cases, but Prime Minister Narendra Modi rejected imposing a new lockdown, saying the country has to think about further unlocking the economy.

Honduran President Juan Orlando Hernández was hospitalized with COVID-19 and pneumonia as the country struggles under the pandemic’s strain and cases rise sharply in the capital. Mexico’s cases keep increasing at near-record levels as the economy starts reopening.

More than a week after New Zealand declared itself virus-free, the country has confirmed three new cases: a man who arrived from Pakistan and two women who returned from Britain.

A bright spot emerged in Hong Kong with Disneyland reopening. Advance reservations are required and only limited attendance is allowed at the park, one of the pillars of Hong Kong’s crucial tourism industry. Social distancing measures sought to avoid mixing different families in lines, at restaurants, on rides and at shops, and more intensive cleaning measures were put into place.

Hong Kong, a city of 7.5 million, has recorded just 1,120 cases and four deaths from COVID-19 but has seen a severe financial impact since it relies heavily on international travel and visitors from China. Most visitors are still barred from entering and Disneyland said anyone who has traveled outside Hong Kong within the previous two weeks would be asked to rescheduled their visit.