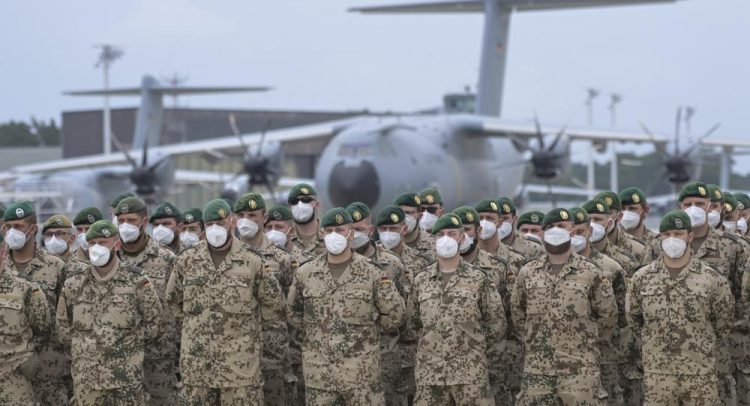 BERLIN (AP) — Germany and Italy declared their missions in Afghanistan over on Wednesday, bringing their deployments to a low-key end nearly 20 years after the first Western soldiers were deployed there.

Announcements from several countries show that a majority of European troops has now left with little ceremony, bringing the Western mission in Afghanistan close to an end as the United States’ own withdrawal looms.

There was no update from NATO on how many nations still have troops in its Resolute Support mission.

Germany publicly announced the end of its nearly 20-year deployment in a statement and a series of tweets from the defense minister late Tuesday evening, shortly after the last plane carrying its troops had left Afghan airspace.

Three transport aircraft landed at the Wunstorf air base in northern Germany on Wednesday afternoon. The troops, wearing masks, lined up on the tarmac for a brief ceremony, but the military dispensed with a bigger reception because of the coronavirus pandemic.

The last Italian troops from Italy’s base in Herat arrived at the military airport in Pisa, late Tuesday. Italy officially declared its mission in Afghanistan over in a statement Wednesday, with Defense Minister Lorenzo Guerini paying tribute to the 53 Italians who died, and 723 who were injured over the past two decades.

Going forward, Guerini said Italy’s commitment to Afghanistan would remain strong but in other forms, “beginning with the strengthening of development cooperation and support for Afghan institutions.”

NATO agreed in April to withdraw its roughly 7,000 non-American forces from Afghanistan, to match U.S. President Joe Biden’s decision to pull all American troops from the country starting May 1. More recently, American officials have said the entire pullout of U.S. troops will most likely be completed by July 4 — and many allies have moved to wrap up their own presence.

Romania brought home 140 troops on Saturday, bringing an end to 19 years in Afghanistan. Spain pulled its last troops out on May 13, Belgium on June 14 and Denmark on June 22. Norway’s troops returned home on Saturday, Estonia’s on June 23, the Netherlands’ on June 24, Finland’s remaining small contingent on June 8 and Sweden’s on May 25.

Georgia’s last troops returned home on Monday. Poland’s defense minister said last week that Warsaw was withdrawing all its troops by the end of this week.

Nicole Winfield in Rome and Associated Press writers around Europe contributed to this report.

Soldiers of the German Armed Forces have lined up in front of the Airbus A400M transport aircraft of the German Air Force for the final roll call in Wunstorf, Germany, Wednesdat, June 390, 2021. The last soldiers of the German Afghanistan mission have arrived at the air base in Lower Saxony. The mission had ended the previous evening after almost 20 years. The soldiers had been flown out with four military planes from the field camp in Masar-i-Sharif in the north of Afghanistan. (Hauke-Christian Dittrich/Pool via AP)

$40B pledged for gender equality, with $2B from Gates group