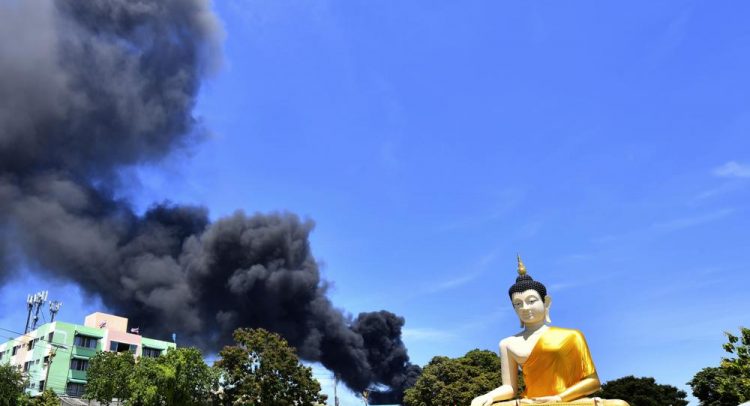 BANGKOK (AP) — A massive explosion at a chemical factory on the outskirts of Bangkok early Monday killed at least one person, injured dozens more and damaged scores of homes, while prompting the evacuation of a wide area over fears of poisonous fumes and the possibility of additional denotations.

Dense clouds of black smoke continued to billow from the site late in the day. Winds shifted and started blowing toward the city’s center, and evacuation centers were set up in a school and a government office for those forced from their homes.

The fire broke out at around 3 a.m. at a foam and plastic pellet manufacturing factory just outside Bangkok near Suvarnabhumi Airport, with the explosion blowing out windows of surrounding homes and sending debris raining from the air.

The blast could be heard for kilometers (miles) and surveillance video from a nearby house captured the bright flash and boom, followed by damage to the home and the one next door from the shockwaves.

The main blaze at the Ming Dih Chemical factory had been brought under control by mid-morning, but an enormous tank containing the chemical styrene monomer continued to burn, said local disaster prevention official Chailit Suwannakitpong. Officials said many tons of styrene monomer were stored on the site.

Helicopters tried to navigate close enough through the thick black smoke to dump fire retardant onto the fire, with little apparent success.

The Prime Minister’s Office ordered that rain clouds be seeded if possible in the hope that a downpour would help bring the pollutants out of the sky, then reversed the command over concerns it would lead to toxic chemicals contaminating the city’s rivers and canals.

Authorities said 62 people had been injured, including 12 involved in firefighting and rescue efforts, and one person had been confirmed dead.

Styrene monomer, a hazardous liquid chemical used in the production of disposable foam plates, cups and other products, can produce poisonous fumes when ignited. Chailit said officials were trying to move all people out of the area, including doctors and patients from the neighborhood’s main hospital where many of the casualties were initially treated, over fear of the fumes and the possibility of more explosions.

The chemical itself also emits styrene gas, a neurotoxin, which can immobilize people within minutes of inhalation and can be fatal at high concentrations. Last year in the Indian city of Visakhapatnam, a leak of styrene gas from a chemical factory killed 12 people and sickened more than 1,000.

Authorities were carefully monitoring the air in the area around the fire, and Pollution Control Department official Thalerngsak Petchsuwan urged anyone remaining in the vicinity to close their doors and windows to avoid inhaling any fumes.

“Those who breathe it in can get dizzy and vomit and it might cause cancer in the long term,” he said.

Authorities ordered the evacuation of an area 5 kilometers (3 miles) around the scene.

Firefighters could be seen in photos from Thai media climbing through the twisted steel wreckage of the complex’s warehouses to get their hoses close enough to the flames as they fought to control the blaze. The badly charred body of the only known fatality — identified by officials as an 18-year-old volunteer firefighter — lay face down among the wreckage, his head resting on his right forearm.

The area around the factory is a mixture of older industrial complexes and newer housing developments that were built after the opening of the airport in 2006.

Jaruwan Chamsopa, who lives about 3 kilometers (1.8 miles) from the factory, said the loud explosion in the middle of the night broke her house’s windows, damaged the roof and caused parts of the ceiling to tumble down. She said the windows of every house on her road were broken as well.

“I was shocked when the explosion took place,” she told The Associated Press. “I came out and saw a big fire in the sky.”

She said she and her husband and mother didn’t evacuate until 8 a.m.

“I didn’t realize that it would be such a dangerous chemical that I have to evacuate,” she said. “I am worried because the black smoke reached my house.”

There was no immediate word on what might have caused the fire in Bang Phli district, and the company was not reachable by phone.

Airport officials said no flights had been canceled but they were continuing to monitor the situation and were prepared to “put in place contingency plans in case of emergency.”

Rising smoke is seen behind the giant Buddha statue in Samut Prakan province, Thailand, Monday, July 5, 2021. A massive explosion at a factory on the outskirts of Bangkok early Monday shook an airport terminal serving Thailand’s capital and prompted the evacuation of residents from the area. (AP Photo)