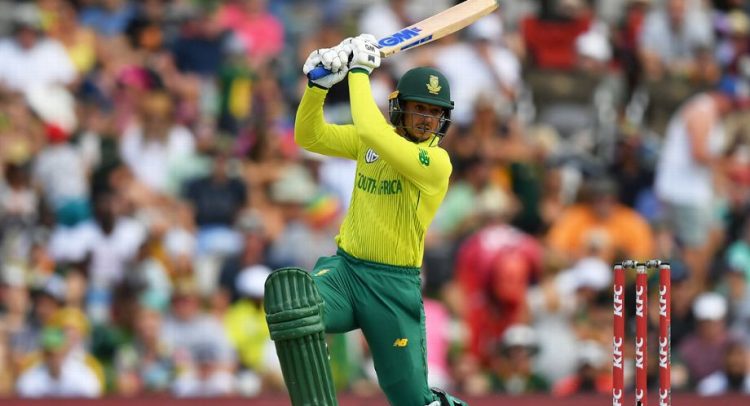 Cricket South Africa (CSA) has combined its return-to-training-and-play plans with an exhibition event in collaboration with a new company, 3TeamCricket, which aims to introduce an experimental format. The showpiece will feature three teams of eight players each – Kingfishers, Hawks and Eagles – who will all play against each other in the same match for the Solidarity Cup. AB de Villiers, Quinton de Kock and Kagiso Rabada will captain the three teams.

The money raised from sponsorship of the three teams will go towards a newly created cricket hardship fund, which aims to provide relief for people within the cricket industry who have been affected by the Covid19 pandemic.

The one-off event, which has been scheduled for June 27 at SuperSport Park, is still pending approval from the country’s sport’s department. South Africa is still in lockdown, and is currently at Level 3 of a five-phase process (with five being the strictest). At this level, non-contact sports training and matches are allowed, but all federations that seek to train and play are required to submit a detailed plan to the department for sport for approval. ESPNcricinfo understands that CSA has had several meetings with the Director General of Sport, including one on Wednesday afternoon, and has impressed upon the officials the urgency of its request. One source said a decision would be made imminently.

No players will be compelled to participate in the event. Dale Steyn is unavailable with what sources have confirmed is a back niggle while Dean Elgar was not considered.

3TeamCricket (3TC) is a joint-venture by the former CEO of FirstRand bank, Paul Harris – who is now involved in a mobile data company RAIN – well-known cricket commentator Mark Nicholas and Francois Pienaar, the former South African rugby captain who has also headed up Varsity Sport.

Harris came up with the concept while playing a three-team card game with his family and intends to grow the format for development. “I’ve always been intrigued with how to develop the game,” he said. “How do you actually get teams that perhaps aren’t as competitive as others into playing with the better teams? How do you get clubs and schools that haven’t got the facilities involved and competing at the highest level? That was the end of the card game, and off I went and spent hours and hours puzzling it out.”

For now, the event is being used as a way for CSA to raise funds for its newly created Hardship Fund, which seeks to benefit those in the cricket industry who have fallen on difficult times because of the coronavirus pandemic. The sponsorship money for each team will go towards this fund.

It is also a way for CSA to engage in live action for the first time since the national team’s ODI series in India was interrupted after one, rained-out fixture, leaving two matches unplayed. No cricket has been played in South Africa since mid-March, with CSA initially calling for a 60-day stop to all activities. That means South Africa’ cricketers have not trained in groups since March 26, when the nationwide lockdown was announced.

For the first 35 days of the lockdown, no outdoor exercise was permitted and players were required to maintain fitness levels through individual programmes at home. Since then, some activity has been allowed, at first during a window between 6am and 9am. Currently, non-contact sports’ training is allowed, but provincial borders remain closed. That means CSA has been unable to have any of its planned winter training camps. The national men’s team’s white-ball series in Sri Lanka was postponed and their July-August tour to West Indies will, at best, be postponed.

Given that, director of cricket Graeme Smith acknowledged that the upcoming match may not feature players at their best. “We’d be amiss to expect our players to be at 100%. They’ve handled the build-up, they’ve handled the lockdown well, they’ve done elements of training. But they haven’t been able to get the extensive cricket or outdoor training that normally we expect of them going into big contests,” he said.

With that, the risk of injury especially to bowlers and the fact that it is mid-winter in South Africa at the moment, some have questioned the advisability of staging such an event so soon. “I don’t know why there is an urgency to have it now. It could have waited a month,” an insider said.

However, it is understood that CSA was keen to be seen to be doing something amid a dearth of live action (the country’s football and rugby competitions, both of which are contact sports, have shown little sign of returning soon) and in light of its own administrative crisis. Suspended CEO Thabang Moroe’s case will only move forward when the results of a forensic audit are received and CSA continues to search for new sponsors after the loss of its headline backer Standard Bank at the end of April. This new venture has allowed it the opportunity to enter into new partnerships.

As for South Africa’s future on-field plans, they may not necessarily feature much more 3TC cricket, with Smith continuing to work both on the FTP with other countries and on players’ match fitness. “The players have been on extensive training programs over the past five to six weeks,” he said. “It’s very difficult to confirm anything on the FTP at the moment; it’s very fluid. We are still in discussions weekly with member bodies on trying to find a way forward.

“The most pressing fixture for us is the trip to the Caribbean and how we get, in particular, those two Test matches done and where we fit them in. We have the scheduled [T20I] series with India in August, then Pakistan were meant to come, and then the scheduled T20 World Cup. We’re in discussions with everybody to see if those can be moved to other parts of the calendar to create some space. It’s hard to give a definitive answer because no one has confirmed anything. It’s up in the air.”

So too, is the future of de Villiers, who said that although he has agreed to this event, his potential participation in a T20 World Cup remains uncertain. “Decisions about involvement with CSA over the next 12 months haven’t been decided on yet. That will happen over the next few months once we get back onto the park, once we start playing cricket again,” de Villiers, who has vacillated between being available for the tournament and being unsure whether he would remain available if it is postponed, said. “I have had some discussions in the past few months but nothing has been decided yet. It would be silly to have made some decisions in the middle of the lockdown when no one knows where we’re heading with cricket. Discussions will certainly open up over the next few months.”