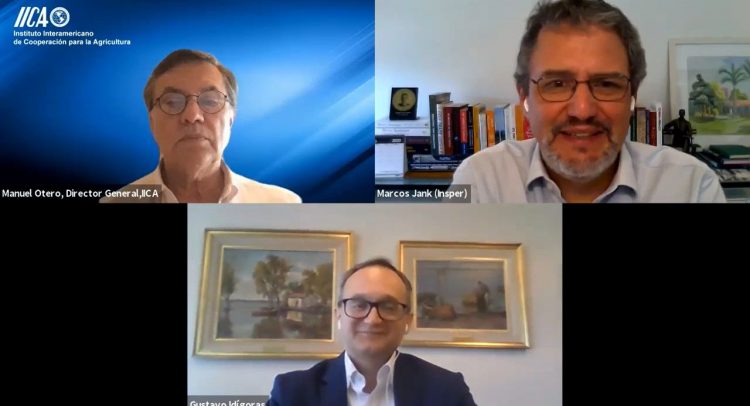 In the height of the Covid-19 pandemic, some Latin American countries, like Argentina and Brazil, are setting agricultural export records, which are expected to strengthen and increase in the future.

On one hand, the health crisis has increased global pressure to guarantee food safety and to ensure a responsible balance between production and environmental concerns.

Both issues are expected to gain increased importance and may generate opportunities to harmonize processes. However, they may also serve as the catalyst for increased protectionism, which could endanger global food security.

These were the warnings sounded by two respected international trade specialists with extensive experience in agricultural negotiations: Gustavo Idígoras, President of the Oil Industry Chamber of Argentina and the Cereal Exporters Center (CIARA-CEC), and Marcos Jank, Senior Professor of Global Agribusiness of the Brazilian institute of economics and business, INSPER, who participated in a virtual discussion with the Director General of the Inter-American Institute for Cooperation on Agriculture (IICA), Manuel Otero.

For the experts, the imposition of Covid-free requirements by importers from China and the European Union demonstrate that the trend could reinforce an upsurge in protectionism, which was already emerging before the pandemic, as postures that run counter to global trade are damaging historic gains in the multilateral system.

Jank insisted that, “Food does not transmit Covid-19. It is a completely arbitrary move that we must fight against, while also strengthening the WTO (World Trade Organization), which is very weak today. We must also improve our relationship with Asia”.

Idígoras predicts a trend towards increased protectionism, arguing that, “The first effect of the pandemic was the decline in prices. The second is that since all governments want to win the next election, they want to spur a rapid economic recovery that may not necessarily imply the promotion of international trade. Therefore, we can foresee some problems”.

“The concept of the public health of a third country could be a determining factor for exports, for example, to China, where our market access could be revoked. Some European countries are developing Covid-free standards, which has been adopted by some supermarkets. These aspects are going to increase”, he said.

They also mentioned that in Europe, health and environmental issues could become real barriers to trade, as demonstrated by the resistance of some countries in the European Union and in the European Parliament to ratify the trade agreement with the South American trade block, Mercosur.

Thus, the specialists recommended increased emphasis, in the short-term, on health and environmental concerns; the simplification and digitalization of trade; and the creation of regional value chains.

“The pandemic aggravated the crisis and external trade is becoming more digitalized. We will have to totally rework the way in which we conduct certifications, checks and authorizations, because the world is demanding transparency and trust”, said Idígoras.

“I believe that we are emerging from these first few months of Covid-19 with very successful agricultural exports and with no issues with respect to supply. However, there are some troubling aspects. Multilateralism is in a profound crisis”, said Jank.

The Director General of IICA, on the other hand, raised concerns about the low level of intraregional trade among Latin American and Caribbean countries.

“The level of interbloc trade is relatively limited, even compared to Africa. Thus, only 14.4% of our exports are within the region, as compared to the European Union, where much more than 60% of trade is within the Union”, he said.

Commenting on this situation, Idígoras referred to the need to facilitate trade and to construct regional value chains, whereas Jank emphasized that these percentages reflect the low level of integration.

“Europe is not the only example. North America, and Asia have more integration of their value chains”, said Jank, who also stressed the importance of bi-ocean railway corridors, running from the Atlantic to the Pacific, to integrate and improve infrastructure and to open up an exit route to Asia.

Main photo: Integrated logistics, harmonized rules and the free flow of trade are issues that are gaining increased relevance, claimed recognized experts in the agrifood sector—Gustavo Idígoras and Marcos Jank—in a discussion with Manuel Otero, Director General of IICA.