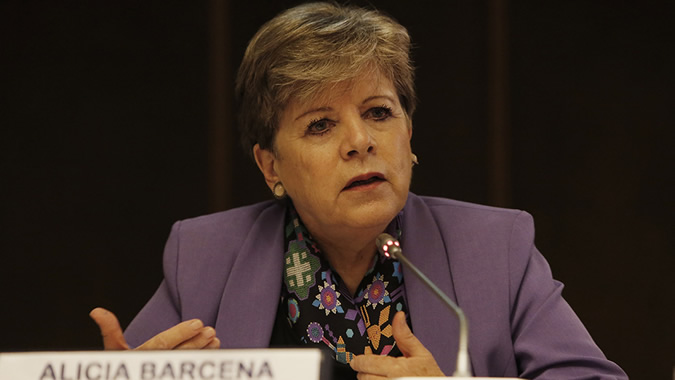 Ministers of women’s affairs, specialists and international officials say that making progress on women’s autonomy and gender equality in Latin America and the Caribbean is not just a matter of social justice but also an indispensable factor for the sustainable development of the region’s countries.

The two-day meeting, which concludes on Tuesday, was inaugurated by Alicia Bárcena, ECLAC’s Executive Secretary; Mariella Mazzotti, director of the National Women’s Institute (INMUJERES) of Uruguay, in her role as president of the Presiding Officers of the Conference; Isabel Plá, Chile’s Minister of Women and Gender Equity; and Silvia Rucks, Resident Coordinator of the United Nations System in Chile.

Along with recognising the advances made on gender equality in recent years, Bárcena called for continuing on this path, especially considering the current global context, plagued by uncertainties on geopolitical, economic, trade-related, environmental and social matters – “tensions that are already having an impact on the region.

“The elusive economic autonomy of women will continue to be one of ECLAC’s priorities. This is about breaking the statistical silence with regard to women’s total work and with regard to the inequality of income, of wealth and of full access to the world of work with all rights.

“This is about breaking the glass ceiling once and for all,” the senior UN official added.

According to ECLAC, Bárcena urged regional countries to make “steady progress” on implementation of the Montevideo Strategy for Implementation of the Regional Gender Agenda within the United Nations’ Sustainable Development Framework by 2030, the road map approved in 2016 during the 13th Regional Conference on Women in Latin America and the Caribbean.
That conference will be evaluated at the succeeding one in 2019 in Santiago, Chile.

“We are convinced that untying the critical knots of gender inequality that are addressed in the Montevideo Strategy is a question of justice and that we must urgently move from the culture of privilege to the culture of rights and of equality,” Bárcena said.

She said the culture of privilege is expressed in “prioritising and valuing what is deemed masculine,” adding that it “crystallises and reproduces unequal power relations between men and women overtime.

“It is manifested in unequal access to power and to resources and in the use of time,” she continued.

At this meeting of the Presiding Officers, Bárcena said: “We have to address these issues with responsibility and with foresight to see how, during the conference in Chile, we can take proposals to governments, businesspeople and civil society and, thereby, ensure that gender equality will become the future that we all desire.”

In her address, Mazzotti agreed that the challenge is to understand “that equality and freedom are not just about a problem that women experience but rather a question of our countries’ sustainable development.”

For this reason, she underscored, it is necessary to “deepen the articulations and concrete linkages between economic policies, productive policies and policies on equality.

“ECLAC and its gender units have played an enormous role in pressing our countries to develop policies that are ever more sustainable, cross-cutting and profound,” Mazzotti said.
Plá affirmed that Chile, and very particularly the government of President Sebastián Piñera, has not only ratified its commitment to the Montevideo Strategy, “but we are also furthering a very challenging agenda because we have proposed to make significant leaps forward in the matter of gender equity.”

The Chilean minister called for developing the conference’s debates around three core ideas. The first, she said, is related to the need to have strong democracies, economic growth and societies that are respectful of human rights. The second, she added, is the conviction that gender equality, in addition to being an act of social justice, is one of the challenges of progress. And third, she noted, is the obligation to make the gender agenda cross-cutting in governments, private businesses, civil society, men and women.

Rucks underscored the importance of having these spaces, “so that Latin American and Caribbean countries can expose the pending challenges on gender equality and advance in a united way.”

During the meeting, ECLAC said a debate will be held about women’s autonomy in changing economic scenarios that brings together representatives of the executive and legislative branches of Antigua and Barbuda, Chile, Costa Rica, El Salvador, Guatemala, Peru, St Lucia, Suriname and Uruguay, among other countries.