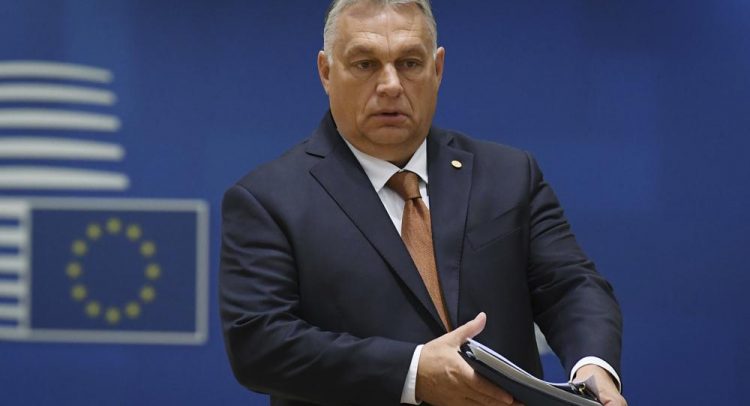 By JUSTIN SPIKE and SAMUEL PETREQUIN

BUDAPEST, Hungary (AP) — As the European Union tries to impose sanctions on Russian oil over the war in Ukraine, Hungary has emerged as one of the biggest obstacles to unanimous support needed from the bloc’s 27 member nations.

The president of the EU’s executive commission, Ursula von der Leyen, last week proposed phasing out imports of Russian crude within six months and refined products by the end of the year to wean Europe off its dependence on Russian fossil fuels and cut off a lucrative source of income that helps fund Russia’s war.

But Hungary’s nationalist government — one of the most friendly to Moscow in the EU — insists it will not support any sanctions that target Russian energy exports. Hungary is heavily reliant on Russian oil and gas and says the EU oil boycott would be an “atomic bomb” for its economy and destroy its “stable energy supply.”

Von der Leyen made a surprise trip to Hungary’s capital on Monday for negotiations with Prime Minister Viktor Orban to try to salvage the proposal, but no agreement has yet been reached.

Here’s what to know about the talks and what comes next:

WHAT IS HUNGARY SAYING?

Hungary’s government has insisted it will block any EU sanctions proposals that include Russian energy, calling it a “red line” that opposes Hungary’s interests. It gets 85% of its natural gas and more than 60% of its oil from Russia.

Orban, widely considered one of Russian President Vladimir Putin’s closest EU allies, has reluctantly supported previous EU sanctions on Moscow, including an embargo on Russian coal. But he has argued that such moves hurt the bloc more than they do Russia.

Since taking power in 2010, Orban has deepened Hungary’s dependency on Russian energy and says its geography and energy infrastructure make a shutdown of Russian oil impossible.

“We said that sanctions on coal would be all right, because they don’t affect Hungary; but now we really have reached a red line, a double line, because the oil and gas embargo would ruin us,” Orban said in a radio interview Friday.

The landlocked country has no seaport to receive global oil shipments and must rely on pipelines. Plus, a flagship government program to reduce utility bills depends on the relatively low cost of Russian fossil fuels and is a major factor underlying Orban’s domestic political support.

Converting Hungary’s oil refineries and pipelines to process oil from non-Russian sources would take five years and require a massive investment, Orban said. That would further drive up high energy prices, leading to shutdowns and unemployment, he said.

IS THERE A CHANCE FOR COMPROMISE?

Besides Hungary, Slovakia and the Czech Republic are asking for years to phase out Russian oil. The European Commission has said it is willing to help countries that are particularly dependent on Russian oil.

“We acknowledge that Hungary and other countries that are landlocked and have significant energy dependency on Russian oil supplies are in a very specific situation which requires that we find specific solutions,” commission spokesman Eric Mamer said Tuesday.

Mamer said Hungary has “legitimate concerns” about oil supplies and that a phaseout of Russian oil could include “differentiated timelines corresponding to the different situations of specific countries.”

“That is definitely one of the variables, because obviously if you are talking about investment in upgrading infrastructure, you need time,” Mamer said.

He did not specify which countries might be offered delayed implementation of an oil embargo or for how long.

In a tweet Monday after her meeting with Orban, von der Leyen said the discussion had been “helpful to clarify issues related to sanctions and energy security” and that progress had been made but “further work is needed.”

French President Emmanuel Macron spoke with Orban on Tuesday about “guarantees” needed for some member states, like Hungary, that “are in a very specific situation with regard to pipeline supplies from Russia,” according to Macron’s office.

WHAT DOES HUNGARY HAVE TO GAIN?

Blocking the sanctions package could be used as leverage in a separate conflict between Budapest and the EU.

The bloc has withheld around $8 billion in pandemic recovery funds from Hungary over what it sees as insufficient anti-corruption measures and has launched a process to withhold further support over breaches of the EU’s rule-of-law principles.

Hungary has been accused of backsliding on democratic values by exerting excessive control over the judiciary, stifling media freedom and denying the rights of LGBT people.

Orban’s government denies the allegations and argues that the EU penalties are politically motivated.

But with Hungary’s economy reeling amid high inflation and a major budget deficit, it will need that EU money for an economic recovery. As EU officials negotiate with Hungary to gain its support for sanctions on Russian energy, the release of withheld funds could serve as a bargaining chip.

FILE – Hungary’s Prime Minister Viktor Orban arrives to a round table meeting at an EU summit in Brussels, Friday, Oct. 22, 2021. The European Commission has launched proceedings that could ultimately lead to the partial suspension of support payments to Hungary for breaching the 27-nation bloc’s rule-of-law standards. The EU’s executive arm said Wednesday, April 27, 2022 that it has given Hungary formal notification and the country has two months to provide explanations and propose remedies. (John Thys, Pool Photo via AP, File)