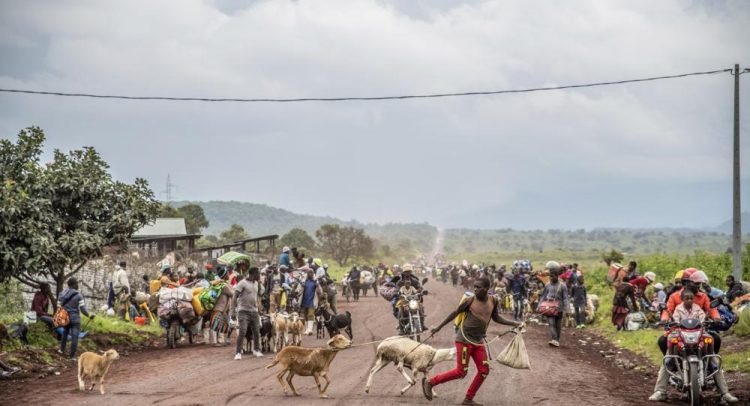 EXPLAINER: Why Rwanda and Congo are sliding toward war again

NAIROBI, Kenya (AP) — The threat of war with neighboring Congo is simmering under the tidy surface of Rwanda’s capital as the East African nation hosts the British prime minister and other world leaders next week for the Commonwealth summit.

Decades-old tensions between Rwanda, which has one of Africa’s most effective militaries, and Congo, one of the continent’s largest and most troubled countries, have spiked along their shared border a few hours’ drive from Rwanda’s capital, Kigali. Alarm has reached the point where Kenya’s president is urging the immediate deployment of a newly created regional force to eastern Congo to keep the peace.

Each side has accused the other of incursions. If Rwanda wants war, “it will have war,” a spokesman for the military governor of Congo’s North Kivu province told thousands of protesters on Wednesday.

Eastern Congo lives with the daily threat from dozens of armed groups that jostle for a piece of the region’s rich mineral wealth that the world mines for electric cars, laptops and mobile phones. Earlier this year, one of the most notorious rebel groups, the M23, surged anew.

The M23 launched an offensive against Congo’s military after saying the government had failed to live up to its decade-long promises made under a peace deal to integrate its fighters into Congo’s military. This week the M23 seized a key trading town, Bunagana, sending thousands of people fleeing into neighboring Uganda and elsewhere.

At that, Congo’s military accused Rwandan forces of “no less than an invasion,” alleging that Rwanda backed the rebels in their capture of Bunagana.

Congo’s government has long accused Rwanda of supporting the M23, which Rwanda denies. The accusations have surged again in recent weeks. Many of the M23 fighters are ethnic Tutsis, the same as Rwanda’s President Paul Kagame.

Rwanda, for its part, has accused Congolese forces of injuring several civilians in cross-border shelling.

WHAT’S THE HISTORY OF TENSIONS?

Relations between Rwanda and Congo have been fraught for decades. Rwanda alleges that Congo gave refuge to the ethnic Hutus who carried out the 1994 Rwandan genocide that killed at least 800,000 ethnic Tutsis and moderate Hutus. In the late 1990s, Rwanda twice sent its forces deep into Congo, joining forces with Congolese rebel leader Laurent Kabila to depose the country’s longtime dictator Mobutu Sese Seko. The Rwandan forces in Congo were widely accused of hunting down and killing ethnic Hutu, even civilians.

Millions of Congo’s people died during the years of conflict, according to rights groups, and the effects still run deep today. Many women live with the scars and trauma of rape.

Eastern Congo continues to see divisions along ethnic lines at times. The region’s history of instability, loose governance and its vast distance — more than 1,600 miles — from Congo’s capital, Kinshasa, have dampened investment and left some basic infrastructure such as roads tattered or nonexistent.

Congo and Rwanda have long accused each other of supporting various rival armed groups in eastern Congo, a restless region and major hub for humanitarian aid. A United Nations peacekeeping force of more than 17,000 personnel is based in Goma, but a top official this week made clear that the tensions with Rwanda and Uganda are not a part of its role.

“That’s not the reason why were are here,” said Lt. Col. Frederic Harvey, the U.N. mission’s chief of liaison with the Congolese military. “We are here to accomplish our mandate, which consists of protecting the civilian population and preserving national integrity.”

Goma, the region’s key city of more than 1 million people, was briefly seized by M23 fighters a decade ago. Many Goma residents now call on the international community to intervene to help establish peace and stability. “Kagame, enough is enough,” read one sign in a protest on Wednesday.

Pope Francis had planned to visit Goma next month as part of a trip to Congo and South Sudan but canceled it last week, citing doctor’s orders because of his knee problems. The visit was meant to draw further global attention to populations long wrestling with conflict, even as this new one develops.

With an eye on the growing tensions, the six-nation East African Community — Burundi, Congo, Kenya, Rwanda, South Sudan and Tanzania — earlier this year created a regional force meant to respond to trouble. Now Kenyan President Uhuru Kenyatta, the current chairman of the bloc, wants the force to be activated immediately and deployed to eastern Congo, noting the “open hostilities” there.

Kenyatta also calls for the eastern Congo provinces of North and South Kivu and Ituri to be declared a “weapons-free zone” where anyone outside mandated forces can be disarmed. Within hours, his call was “warmly” welcomed by the president of Burundi, which borders both Rwanda and Congo.

Regional commanders of the member defense forces will meet on Sunday in Kenya’s capital, Nairobi, at the heart of East Africa’s economic hub.

The regional force was agreed to by leaders from the countries now seemingly closing in on war — Congo, the EAC’s newest member, and Rwanda, the largest African troop contributor to U.N. peacekeeping missions worldwide.

But Rwanda notably was the only EAC member to skip a meeting of the heads of regional armed forces earlier this month in Goma. And there was no immediate response from Rwanda on Thursday to Kenyatta’s call to action.

Congo, too, didn’t comment directly on the call to deploy the regional force, but government spokesman Patrick Muyaya welcomed the Kenyan president’s request for a cessation of hostilities and weapons-free zones.

FILE – People walk on the road near Kibumba, north of Goma, Democratic Republic of Congo, as they flee fighting between Congolese forces and M23 rebels in North Kivu, Tuesday May 24, 2022. Decades-old tensions between Rwanda, one of Africa’s most effective militaries, and Congo, one of its largest and most troubled countries, have spiked anew along their shared border a few hours’ drive from Rwanda’s capital, Kigali. Alarm has reached the point where Kenya’s president is urging the immediate deployment of a newly created regional force to eastern Congo to keep the peace. (AP Photo/Moses Sawasawa, File)