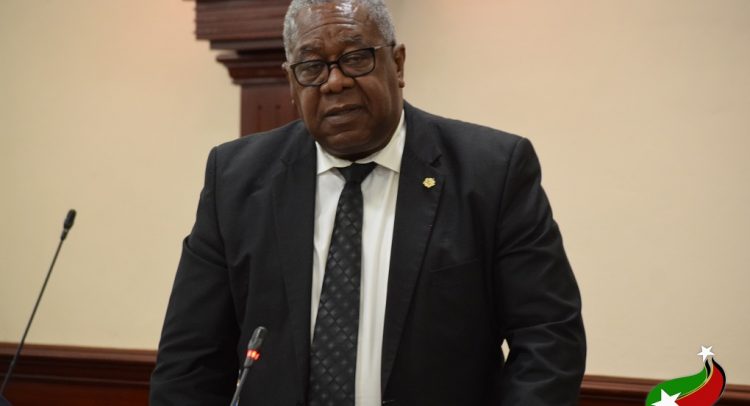 The Government of National Unity has deemed it necessary to extend the State of Emergency as it moves over the next few weeks to have a second reading for the COVID-19 Prevention and Control Bill, 2020, that had its first reading on October 15, 2020, says Attorney General, the Honourable Vincent Byron. The extension of the State of Emergency will not hinder the borders reopening.

The Attorney General was at the time speaking at a Sitting of Parliament on October 15. He said that the Government has found it necessary to keep the State of Emergency in place during the stipulated period.

“We find it necessary for the current Statutory Rules and Orders SR&O that is in place covering the regulations under the Emergency Powers Act to be extended during that same period,” he said.

Attorney General Byron stated that it is open to the Parliament to return at any time to revoke the State of Emergency by Resolution once the COVID-19 Prevention and Control Bill, 2020, has passed and “we are satisfied that the measures that it has covered, and the regime that it is intended to establish works to protect all our citizens.”

The Attorney General said that it is understood that there is a concern in the country that while the borders are reopened to allow for economic activity and slowly jumpstart the tourism industry, “this is a way in which we can continue to maintain a measured control.”

The extension of the State of Emergency will be for the next two months or more, said the Attorney General, for the National Assembly to be able to have the COVID-19 Prevention and Control Bill, 2020, properly passed into law and implemented.

“It is a stop-gap measure for a short window, and we hope we get full support from this Parliament for this extension during the course of the Resolution,” he said.

The Resolution reads in part: “…A resolution of the National Assembly for the purposes of Subsection Three shall not be passed in the Assembly unless it is supported by the votes of not less than two-thirds of all the representatives and senators and whereas the ongoing threat to St. Christopher and Nevis of the incursion of the COVID-19 Virus an infectious disease on the scale of a global pandemic continues on an unprecedented scale with millions of persons being infected worldwide. Now, therefore, be it hereby resolved by this National Assembly that as a consequence of the serious nature of the continued threat of the COVID-19 Pandemic to the public health of St. Christopher and Nevis that is necessary to extend the State of Emergency from the 19th of October, 2020, until the 31st of December, 2020.”

Attorney General Byron said that the Government is mindful of the need to be careful as it extends its State of Emergency.

“We understand that we have over time, over the last few months, been able to gradually open up the country,” he said. “We have slowly reduced the time for curfew, the lockdowns, these have been removed. The country has opened up, but there had been a need to continue to maintain some measure of control and the State of Emergency did just that.”

Attorney General Byron said that the State of Emergency gives the medical team and the compliance team the tools by which they can ensure that the people of St. Kitts and Nevis are protected.

“As we go over the next couple of weeks to move to open the borders the State of Emergency will not interfere with that,” he said. “It will allow our medical team, our security forces, our task force to be in a position to administer our response to COVID-19.”

Trump says Fauci is ‘terrific guy’ but not ‘team player’