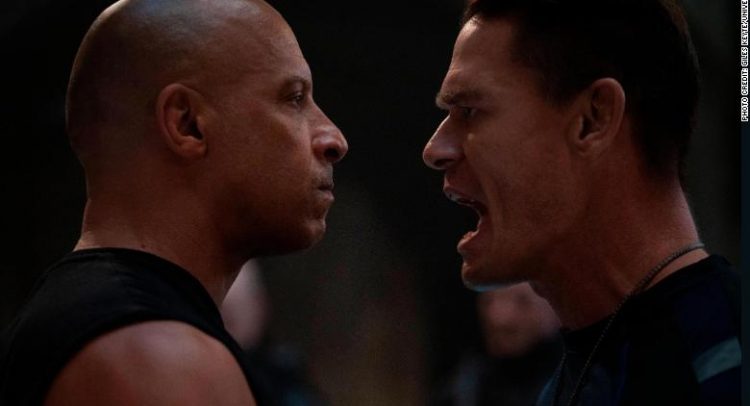 (CNN) – Marking the ninth movie in 20 years, “F9: The Fast Saga” finally speeds into theaters, with its bloated mayhem serving as an invitation to return to — mindless fun! Come share with others! Even allowing for the goofy nature of the franchise, the latest edition tries too hard to up the ante, which won’t stop Universal from revving up “F:X” (or some equally clever title) as soon as possible.

The inevitable challenge of these movies involves providing the adrenaline rush that audiences seek, while adding a few new accessories to provide points of differentiation from previous installments. Plus, with two decades of skid marks and explosions in the rear-view mirror, there’s plenty of room for callbacks to past adventures, even if that means Helen Mirren and Charlize Theron dropping in just long enough to collect a check.

The big wrinkle in “F9” involves exploring the past of Dom Toretto (Vin Diesel), revealing an estranged brother, Jakob, who has clearly spent as much time in the weight room. He’s played by John Cena, and to say there’s a sibling rivalry doesn’t come close to covering things, as they pursue a device with world-threatening consequences on parallel tracks.
There is an operatic quality to those scenes, which stumble from “epic” almost to the point of self-parody. Sure, these are tough dudes (mostly) who laugh at death, but when the musical cues shift to sentimental and Dom starts waxing poetic about family, the “Fast Saga” can hold its own with the Hallmark Channel.

Of course, that’s not the main attraction, but rather the escalating chases and action sequences, as meticulously constructed by director/co-writer Justin Lin, taking the wheel of his fourth “Fast & Furious” film.

To its credit, the movie has a bit of fun with its own history, including Tej (Ludacris) and Roman (Tyrese Gibson) joking about their earlier run-in with a submarine. But then the filmmakers give that moment run for its money in terms of sheer ridiculousness, as the action soars high above the waves instead of below them

The true fate of the “Furious” films at this point appears to be one of diminishing returns, with “F9’s” first major sequence — a breakneck chase and battle through jungle terrain — providing thrills with its sheer gravity-defying absurdity, an effect that dwindles with each successive series of stunts, as Dom and company crisscross the globe.

The movie has already opened outside the US — earning close to $300 million, much of that from China (despite Cena’s public-relations headache regarding Taiwan while promoting its release) — reinforcing the franchise’s status as a global money-making machine. Even so, the hope is clearly that this sort of made-for-Imax attraction will provide a significant spark as US audiences gingerly brave returning to theaters.

Seen that way, “F9” goes the extra mile in trying to be worth the money and deliver a communal experience. After a year where people could pause and rewind to catch missed dialogue, this is one of those movies where missed lines don’t matter, and the only direction this vehicle goes is forward, even when it’s just spinning its wheels.