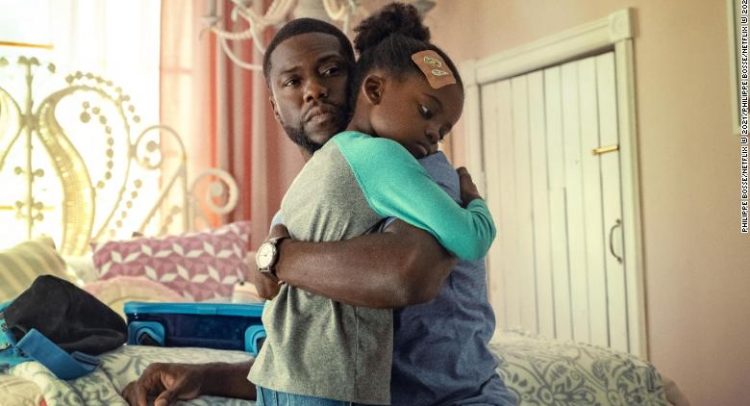 (CNN) – “Fatherhood” arrives just in time for Father’s Day, in a heart-tugging package that presents star/producer Kevin Hart an opportunity to show off his dramatic acting chops. Not that there aren’t laughs in this sweetly spirited, conflict-light, fact-based Netflix movie, which comes with the added stamp of being presented by the Obamas’ Higher Ground Productions.

Based on the book by Matthew Logelin (played by Hart), the movie begins at the funeral for his wife Liz (“Them’s” Deborah Ayorinde), who died of a pulmonary embolism shortly after giving birth to their daughter.

Devastated, Matt resists the pleas from Liz’s mother (Alfre Woodard, terrific as always) to let her take the baby back to Minnesota, insisting on raising her alone while trying to manage a demanding full-time job with minimal assistance from his two idiot buddies, played by Lil Rel Howery and Anthony Carrigan (“Barry”). They aren’t much help with tasks like installing car seats or assembling baby furniture, but three men and babies have a fairly lucrative screen history, so best not to quibble.

Matt’s boss (Paul Reiser) also tries to be understanding, but he’s not much better at it than the occasionally tone-deaf guys, or the strangers who keep cheerfully asking him where the baby’s mom is.
Directed by Paul Weitz (“About a Boy”), who shares script credit with Dana Stevens, the movie derives considerable comedy from Matt’s initial plight — including visual gags, like placing the diaper genie under a toy basketball hoop — but that’s leavened by the crushing loss that he has experienced, and the nagging self-doubt about his parenting skills.

“You think you can do this, but you can’t,” his mother-in-law tells him early on, a question that doesn’t really fade as baby Maddy grows up into a little girl (the adorable Melody Hurd, who also played Ayorinde’s daughter, as it happens, in Amazon’s “Them”).

Adding to the complications, Matt meets a woman, also named Liz (DeWanda Wise, the star of Netflix’s update of “She’s Gotta Have It”), adding a third ball to his juggling act, while trying to remain focused on raising Maddy as his primary concern.

“I just want to do what your mom would have wanted me to do,” Matt tells Maddy, after butting heads with her grandma.

Other hurdles emerge, but there’s really not a whole lot more to it than that beyond watching Matt grow to meet the demands and quirks of parenting, and Hart — joining a long legacy of comedic actors who have expanded to more dramatic parts — exhibit emotional depths not regularly associated with the likes of his comedies or the “Jumanji” movies. Weitz creates enough room for him to flex those muscles, but the widowed sitcom dad riffs are clearly secondary to the film’s family underpinnings.

The press notes evoke another former First Lady by referring to the “It takes a village” aspect of Matt’s story, but the appeal of “Fatherhood” really boils down to its title, the resilience of the human spirit, and Hart being bold enough — like his alter ego — to think that he can do this. And like Matt, by the time it’s over, he’s demonstrated that he pretty well can.