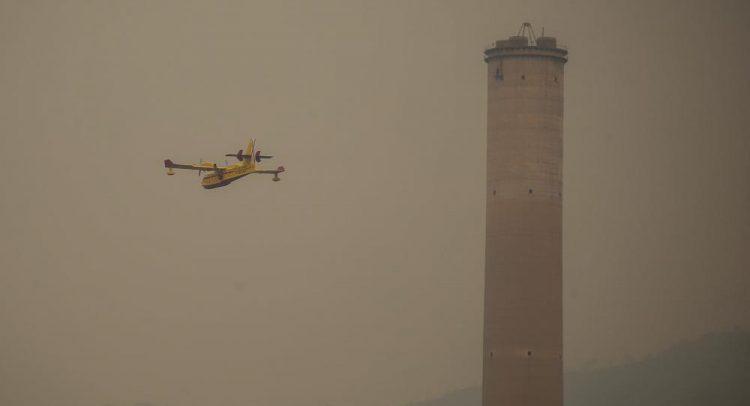 By MEHMET GUZEL and SUZAN FRASER

MUGLA, Turkey (AP) — A wildfire that reached the compound of a coal-fueled power plant in southwest Turkey and forced nearby residents to flee in boats and cars was contained on Thursday after raging for some 11 hours, officials and media reports said.

Strong winds drove the fire toward the Kemerkoy power plant in Mugla province late Wednesday, prompting evacuations from the nearby seaside resort of Oren. Navy vessels were deployed to help ferry away residents, while cars formed long convoys on roads leading away from the area, Haberturk television reported.

Precautions were taken before the flames reached the Kemerkoy power plant. The plant’s hydrogen tanks were emptied, and workers were evacuated. Flammable and explosive substances had also been removed, according to state broadcaster TRT.

Energy Minister Fatih Donmez told reporters that the plant’s main units, including its turbines, were not damaged, adding that authorities wanted to render it operational again as soon as possible. He added that no dangerous emissions were reported from the plant.

“At the moment, there is no fire that is threatening the plant,” he said. “This plant is of critical importance to the region.”

The privately run plant uses lignite to generate electricity, according to its website.

Television images showed dozens of fire trucks and water tankers surrounding the plant’s main building, some dousing water as part of a cooling effort that also involved planes and helicopters. The main building did not appear to have been affected.

A forestry authority official warned, however, that the Kemerkoy plant and another nearby power station were still at risk due to the unpredictable winds. Authorities blocked roads and were not allowing people to get close to Kemerkoy.

Before the fire reached the power plant, firefighters had been working for two days to protect it from advancing flames. Videos from an adjacent neighborhood in Milas showed charred, decimated trees.

Turkish President Recep Tayyip Erdogan’s government has come under intense criticism over an allegedly slow response to the blazes and inadequate preparedness for large-scale wildfires. The government acknowledged that the country did not have a useable fleet of water-dropping planes.

Firefighting aircraft from Ukraine, Russia, Azerbaijan, Iran, Spain and Croatia came to Turkey to back the ground operation. Planes from Israel were expected to arrive later Thursday.

In the past week, mayors posted videos on social media pleading for aerial firefighting responses to local wildfires, and Turkish celebrities joined a social media campaign requesting foreign help to combat the blazes.

The campaign drew an angry response from a top Erdogan aide, Fahrettin Altun, who said, “Our Turkey is strong. Our state is standing strong.”

The Ankara Chief Public Prosecutor’s Office announced Thursday that it was investigating social media postings containing the hashtag “Help Turkey” for spreading allegedly false information that the office said had harmed public morale and misrepresented the state as being “incapable” of battling the fires.

In an effort to control the flow of information, Turkey’s broadcasting watchdog warned television stations Tuesday about airing reports that it said were creating an “atmosphere of chaos” and affecting the morale of firefighters and the public.

Erdogan, whom critics accuse of increased authoritarianism, has accused opposition party members of perpetuating a “terror of lies” for disparaging the government’s wildfire response. The president said in an interview late Wednesday that Turkey’s municipalities, which the country’s main opposition party controls in many of the fire-stricken areas, were also responsible for protecting towns. Mayors have said they were not invited to crisis coordination meetings.

A heat wave across southern Europe, fed by hot air from North Africa, has contributed to wildfires breaking out across the Mediterranean, including in Italy and Greece. The heat wave is forecast to continue in Turkey and Greece until the end of the week.

A Spanish firefighting plane pours water on a fire near the Kemerkoy Power Plant, a coal-fueled power plant, in Milas, Mugla in southwest Turkey, Thursday, Aug. 5, 2021. A wildfire that reached the compound of a coal-fueled power plant in southwest Turkey and forced evacuations by boats and cars, was contained on Thursday after raging for some 11 hours, officials and media reports said. (AP Photo/Emre Tazegul)