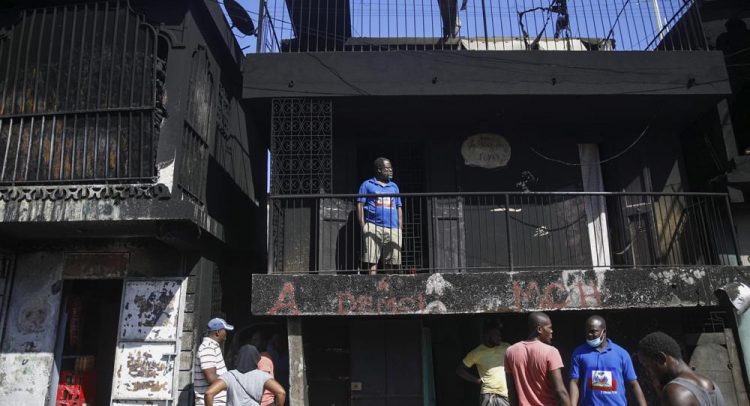 CAP-HAITIEN, Haiti (AP) — A gasoline tanker overturned and exploded in northern Haiti, unleashing a fireball that swept through homes and businesses on its way to killing at least 60 people in the latest disaster to befall the Caribbean nation.

The blast occurred shortly after midnight in Cap-Haitien, Haiti’s second largest city, along the northern coast. Hours later, at dawn Tuesday, buildings and overturned vehicles were still smoldering as firefighters covered the burned bodies of the young victims in white sheets and loaded them onto the back of a construction truck.

Hundreds of Haitians — who aren’t easily shocked amid so much of their country’s misfortune — looked on from rooftops in disbelief at the loss of so much life.

“It’s horrible what happened,” said Patrick Almonor, deputy mayor of Cap-Haitien, adding that he expects the death toll to rise as first responders comb through buildings gutted by the fire. “We lost so many lives.”

Early reports indicate that the tanker was trying to avoid an oncoming motorcycle when it flipped. Onlookers then rushed to the scene with buckets to scoop up what they could of the tanker’s valuable cargo, likely for resale on the black market, as the fuel spilled toward a nearby pile of simmering trash, Dave Larose, a civil engineer who works in Cap-Haitien, told The Associated Press.

In recent months, Haiti has been battered by severe fuel shortages that have shuttered gas stations, sent gas prices on the black market spiraling and forced hospitals and businesses to close as the U.S. and Canadian governments have urged their citizens to leave while they still can.

The shortages are the latest manifestation of a society on the brink ever since the July 7 assassination of President Jovenel Moise and a 7.2 magnitude earthquake a few weeks later that killed more than 2,200 people and destroyed tens of thousands of homes.

The country of more than 11 million people also has been hit by a spike in gang-related kidnappings, including 17 missionaries with a U.S. religious organization who were abducted in mid-October. Five of them have been released but another 12 are still being held.

“It’s terrible what our country has to go through,” Larose said.

Prime Minister Ariel Henry, himself a physician, announced that he would deploy field hospitals and travel to the area in the company of a large contingent of medical professionals. He also declared three days of national mourning.

“The entire Haitian nation is grieving,” he tweeted

Residents stand at their homes damaged by a gasoline truck that overturned and exploded in Cap-Hatien, Haiti, Tuesday, Dec. 14, 2021. The explosion engulfed cars and homes in flames, killing more than 50 people and injuring dozens of others. (AP Photo/Joseph Odelyn)

What’s your religion? In US, a common reply now is “None”